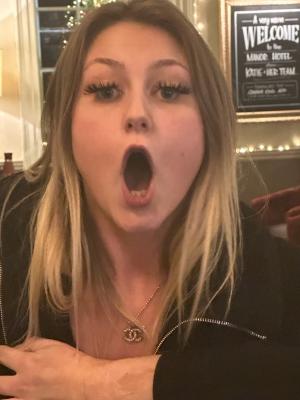 Courtney Cullen attacks a hotel guest with a glass in the Manor Hotel Yeovil.

Courtney Cullen and her brother got upset at the Manor Hotel in Yeovil, Somerset, as they missed the last orders and were refused to be served by bar staff, with the end result of seeing a hotel guest ‘glassed’ by the young woman as she flew into a wild frenzy.

The attack occurred on the evening of New Year’s Day at the Manor Hotel in Yeovil after Courtney Cullen was refused another drink, the bar lady having had 30 minutes before called time.

Cullen, her brother and two others would not accept that time had been called and were insulting the bar staff, attempting to claim it was law to call time at 10.50 pm and that they should still be served.

They then claimed the guest sitting alone close to the bar had been served another pint, when in fact, he had bought it when the bar lady had called time; as they brought him into their argument, the businessman pointed out that the bar can close when it wishes and that there is no law to say it should remain open, he has told ranting Courtney Cullen to look at the time stamp of his last purchase on his phone, Mullen not liking the facts, went face to face screaming at the guest before losing total control and smashing the guest’s beer glass before hitting him in the forehead with the broken glass.

After that, Cullen’s brother then attempted to attack the guest. However, the guest defended himself, dragged his attacker behind the bar, and pinned him against the wall before other guests at the hotel intervened. The brother realising he had bitten off more than he could chew, was slipped out the back door by bar staff for his safety.

An eyewitness who was also in the bar at the time and saw the events unfold told Global247news:

” It had been a lovely evening in the bar, all joyful spirits until this unruly mob came in quite late.

“The female had a mouth like a sewer; I could hear her swearing and cussing from the other end of the bar where I was sitting with my wife.  When they were refused to be served as last orders had been called some twenty minutes beforehand – she kicked off arguing and slagging off the bar staff, then the others in her group joined in, claiming by law they should be served.

” When the quietly sat guest up by the bar politely pointed out the facts of the situation and the actual law, she then tried claiming the guest had been served another drink; she went over to the table, got right in the guest’s face screaming like a nutcase, as she got no reaction from the cool guest, who just took her photo, she grabbed his pint glass, smashing on the table before launching the remains of the glass into his forehead just above his left eye.

“Then the brother came over to cowardly attack the guest, but the guest now had enough and defended himself; he dragged the young lad behind the bar before he ran off out the back door.

” The woman was the instigator of all the trouble, and it resulted in her not being able to contain her vile temper and performing the cowardly act of ‘glassing’ someone.” he finished.

Global247news understands the matter was reported to Avon and Somerset Police, with PC Pulford having studied clear CCTV footage of the incident as the assaulted guest pursues both a criminal and civil prosecution against Courtney Cullen.

He told this morning to our local reporter this: ” I have told the police to pursue a criminal conviction through the law courts, the officer in charge of the case is currently carrying out a full investigation and has taken photos etc., of my head wound caused by the broken glass. I’m not going to leave the matter there; I have contacted my lawyers to start a civil prosecution for damages against the woman who decided to ‘glass’ me.  It’s now in the hands of the M&M law firm in Cardiff, who are instructed to sue her for as much as they can; I’m fortunate to have my eyesight still this morning.” he finished.

Global spoke to the victim’s instructed law firm, who said:

“Yes, we have been instructed in this incident to take civil action for damages against our client’s attacker; we are also instructed to ensure the local police force in Somerset takes the matter to the CPS for criminal prosecution; we can’t comment any further at this stage.”

The offence of grievous bodily harm (GBH) with intent :

For example, picking up a glass bottle, breaking off the neck and stabbing the victim with the broken bottle causing serious wounding or disfigurement, carries between three and 16 years of custody,