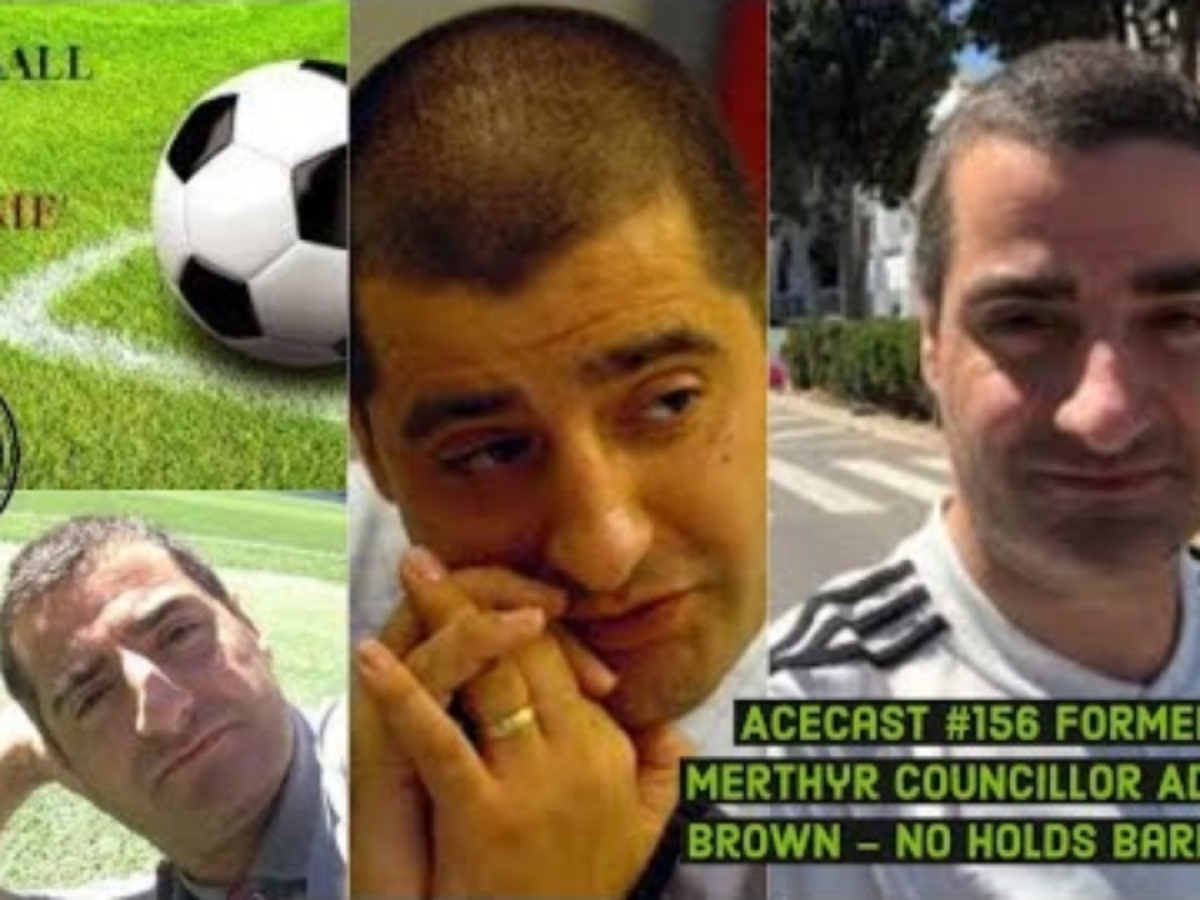 Adam Brown from Merthyr Tydfil, the disgraced councillor and failed businessman, operates a YouTube channel known as ‘ With Brownie’ although that has now due to complaints from parents being investigated by the South Wales Police.

Brown, who takes to YouTube to openly admit to his use of cocaine and prostitutes whilst swigging beer on his small channel, found himself in hot water after parents complained about him contacting young children as young as thirteen late at night.

The disgraced councillor, who holds the record ban by Merthyr Tydfil council of three years – then went on to join the UKIP party before being suspended and then ironically moving to Spain to become a furniture delivery driver and make another attempt to start a recruitment company after liquidating numerous companies in the UK, leaving a trail of debt and unpaid County Court Judgements.

In Spain, Brown set up ‘Football With Brownie’, a show to join the long list of football shows broadcast by football lovers, although the topics often swayed away from football.

Now parents are warning other parents in South Wales about Brown and his antics with young children, with one making a complaint to the South Wales Police.

Brown, live on his channel, whilst drinking alcohol to excess and ranting and raving, made false accusations against a Cardiff City supporting 13 year old with learning disabilities; he then went one further to call the child at nearly midnight, thankfully with his mother answering the phone as her young child was asleep in bed.

After a police investigation, it transpired the accusations against the minor were false, and Brown was reprimanded for his behaviour.

Now parents in South Wales are collaborating to warn other parents of Adam Brown’s behaviour on YouTube, especially where young children are concerned.

“All parents in South Wales need to be aware of this vile man and show; I heard about his actions through a friend and was disgusted at the findings.

“The man constantly lies on his show to impress young children, whilst at the same time brags about his use of drink and drugs as well as prostitutes.

” His following is mainly Cardiff City youngsters ranging from 12 – 16, who he often targets with vile abuse.

“All parents need to be fully aware of this vile channel by a despicable man; I urge you to check your children’s electronic equipment and block them where possible from access.

“It’s not something you want your child watching – I assure you,” the school teacher finished.

A former acquaintance of Brown speaking to Global247news today said: ” The warnings should be listened to, he’s certainly not a role model for children, that’s putting it lightly.

“He’s a constant pathological liar on his show; he even claimed his mother was 90 when she was proved to be 75; when he was questioned about it, he said he couldn’t remember his mother’s age.

“I’ve known of him, like many others here in the valleys, constantly for years in the media for his outrageous behaviour; it’s all on google for parents who need to do their research.

“I had hoped age would have seen him pull his life together, but it doesn’t appear so, whilst his own age group have washed their hands of him – he’s now preying on young children for his attention-seeking on YouTube.

“It’s quite disgusting content, and I wouldn’t allow my children to watch it”, he finished.

Meanwhile, unemployed Brown was unavailable for comment, changing his phone number since the latest incident.