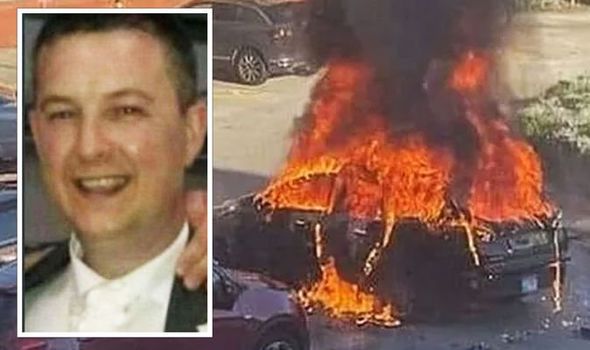 A taxi driver was hailed as a hero last night after locking a suspicious passenger in his cab moments before the vehicle blew up outside a hospital in what police are probing as a potential Poppy Day terror attack.

The explosion destroyed cabbie David Perry’s car in a fireball outside the Liverpool Women’s Hospital, seconds before the 11 am minute’s silence was due to take place. The male passenger, who had asked to go to the city’s Service of Remembrance, was the only person killed.

Amazingly married father-of-two Mr Perry, who was standing nearby, suffered just cuts, bruises and damage to his eardrum. Last night he was discharged from hospital, friends told MailOnline, while the bomb squad remained at the site.

In response to the explosion, anti-terror police carried out raids across the city yesterday, arresting three men under the Terrorism Act and evacuating dozens of homes in an operation that remained ongoing into Monday morning.

Despite the shock of staff and patients at Europe’s largest maternity hospital as the vehicle burned yards from their front door, sources close to Mr Perry’s family today said how it was not thought to be the original target of the suspected bombing and that the driver’s actions potentially saved dozens of lives.

MI5 insiders said spooks were probing if there was any link between the date and original destination and whether it was an Islamist attack.

Sources said the experienced cabbie picked up a fare who initially asked to be taken to Liverpool’s Anglican Cathedral, half a mile from the hospital, where a Remembrance Sunday parade ended and a memorial event featuring thousands of servicemen, veterans and dignitaries was being held.

‘They couldn’t get there, the roads were blocked off,’ one friend of Mr Perry said. ‘The man changed his mind and asked to go to the city centre instead.

‘But when they were going past the Women’s Hospital he said to pull in there. It was just before 11. David noticed the man had some kind of light attached to his clothing and was messing around with it, it didn’t look right at all.

‘I don’t know how he’s done it with a split second’s thought but David’s jumped out and locked the car with this guy in the back. As soon as he did, it’s gone off. David’s the luckiest man in Britain as well as the most heroic, if this guy got in the hospital God knows what could have happened.’

Another friend added: ‘David suffered cuts and bruises, a perforated eardrum and needed stitches in his ear. He’ll be sore in the morning but he’s home. I’m just glad no new babies were leaving at the time. For David to have probably been terrified and think so fast and then end up OK – it’s amazing.’

A fundraiser was last night set up by some of Mr Perry’s Liverpool taxi driver colleagues to help him and his family recover from the ordeal. It had made £8,500 within hours.

One theory police are probing is that the detonators on a potential bomb exploded but not the main charge. That would be a repeat of the failed 21/7 bombings three weeks after the 7/7 atrocity in 2005.