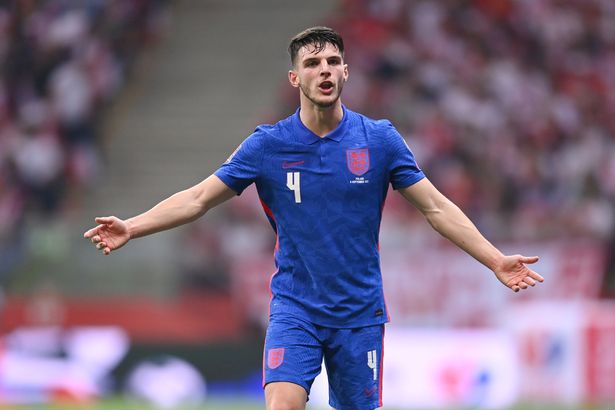 Real Madrid are lining up a major bid of £110 million for West Ham midfielder Declan Rice.

The defensive midfielder has been pencilled in on Carlos Ancelotti’s ‘rebuild’ list to Florentino Pérez.

Pėrez, who brought back the club former manager to assist in rebuilding the side since the departure of much of the old guard, with the likes of Sergio Ramos departing the Los Blancos, has requested a wish list of players from Ancelotti, which targets the central defensive midfielder.

Rice himself, just 22, has cemented his place in the national England side as well as becoming captain at London club West Ham United.

A host of new young stars are expected to arrive at the Bernabeu next season as the rebuild starts to take shape, which includes the arrival of Mbappe from PSG, a player they bid for in the transfer window to the tune of 200 million euro.

With the bid declined, the player will sign as a free agent at the end of the season, whilst Ancelloti will make several further additions.

One of those additions being the current starlet of English football, Declan Rice. The deal will be financed by the freeing up of another British import, Gareth Bale, as his £26 million a year contract expires, allowing the club to tempt Rice with a salary over half a million pound a week more than trebling his current wages at West Ham United.

According to sources, the player’s current club is urgently trying to get their captain to sign a new contract that is only agreeable if the player is allowed a release clause. However, that doesn’t appear to be a stalling point for Madrid.

A football agent in Madrid who represents the club said: ” Mandates have already been agreed with Pérez to land Declan Rice and the club expect to have to pay over £100 million.

“He’s an outstanding player, and at just 22 years old, the perfect product for Madrid as the club starts its rebuilding progress.”