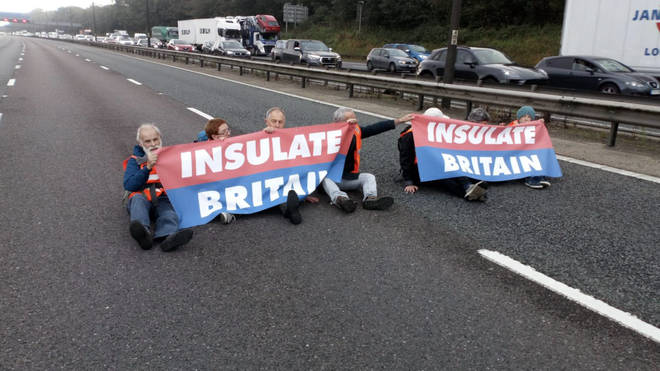 Climate change protesters sparked the fury of motorists again this morning, causing major traffic disruption when they blocked the M25 for the second time in a week.

Eighteen protesters belonging to ‘Insulate Britain’ halted traffic near Junction 23 at South Mimms in their latest protest, which began at 8 am today.

Another group shut down the main carriageway of the M25 anti-clockwise in Surrey between junction 9 at Leatherhead and junction 8 at Reigate. A crash happened at around 10 am several miles from the site of the protest.

A third group blocked junction 1b near the Dartford crossing. Demos were also taking place at Junction 25 on the M25, the A10 in Hertfordshire and Junction 10 of the A3 in Surrey.

The group said it had sent 89 protesters to various sites along the motorway this morning. Around 9.30 am, the group had blocked traffic in five locations.

Emergency services later reported a multiple vehicle crash near the site of the protest. National Highways said the air ambulance had been deployed to the scene.

It said in a statement: “A secondary incident has occurred where emergency services including helimed are in attendance between J10 and J9. This is a multiple vehicle collision.”

Shortly after 10.15 am, Surrey police said 25 arrests had been made, and all protesters had been moved on.

The force said: “Update: We have been working with partner Forces across the region, including Metropolitan Police, to deal with widespread protesters on the M25. All protesters have now been cleared from both Junctions 8 and 10. A total of 25 arrests have been made.

“We are also dealing with a road traffic collision at Junction 9 of the M25 involving multiple vehicles. Police, fire service and ambulances are currently on the scene.”

The protest was reported just after 8 am on Wednesday.

Protesters held signs saying ‘sorry for the disruption’ as they faced a barrage of insults from motorists stuck in the queue during rush hour.

Police attended the scene at South Mimms shortly after 8 am this morning as the route onto the country’s busiest motorway quickly began to clog up.

One driver stuck at the scene said today: “They are working against themselves.” Other motorists screamed abuse telling the group, “we’ll lose our jobs.”

Hertfordshire police said: “We are currently dealing with an incident near junction 1 (South Mimms) of the A1M southbound involving a small number of protestors.

“Officers are at the scene. The road has been closed, and as a result, there is some traffic congestion. Motorists are asked to please avoid the area where possible.”

Insulate Britain want the government to ensure all social housing in Britain is properly insulated by 2025 to help fight climate change.

The group made efforts to justify their actions with this statement: “This week scores of people have blocked motorways. The people in cars are angry; they are outraged; they are disgusted.

“Rightly. What a thing to do. What stupidity. What idiots. So why are we doing it?

“Why is an 82-year-old stepping out onto the road, an elderly man with a severe heart condition sitting in front of traffic, alongside mothers with children to care for, builders and electricians who want to get on with their jobs, students with their whole lives ahead of them?

“Because we will not stand by and see our families suffer, their livelihoods destroyed, and our country betrayed. Never. Never.

“For thirty years, our politicians have done so very little, and now we risk losing all that we love. The world is burning and burning, each year worse than the last.”