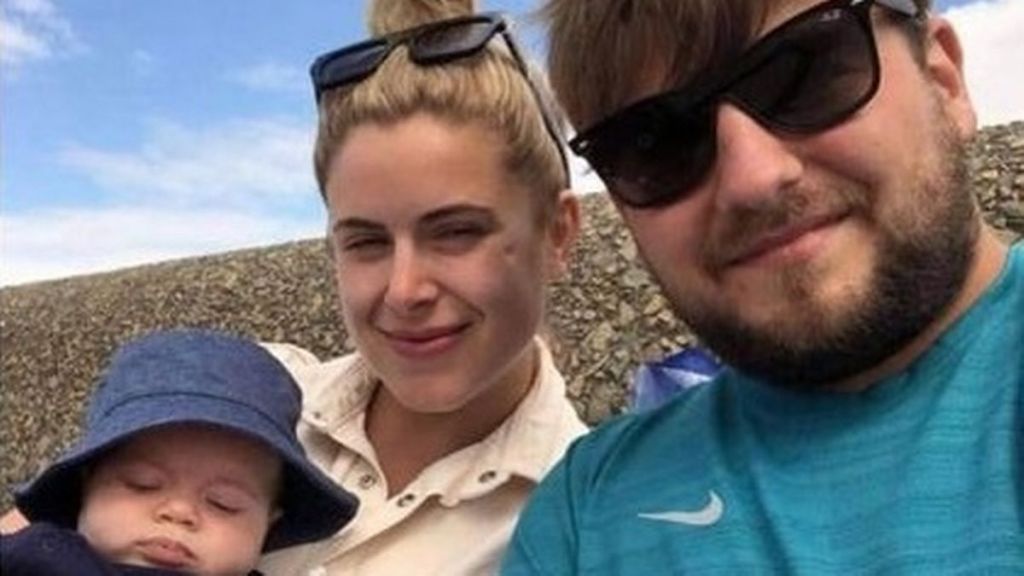 A hero mum threw her baby out of the way of a Mercedes as it ploughed into her and left her with horror injuries that forced doctors to amputate her right leg.

NHS nurse Ruby Flanagan, 24, carried her five-month-old son Leon over a zebra crossing towards Aldi when she was crushed between the silver Mercedes and a blue Volkswagen.

Staff from shops rushed to her side to wrap her legs and comfort Ruby, from Wallasey, Wirral, and her son Leon and her nan, who was with them.

Ruby was “traumatised” when she woke up and found her right leg had been amputated.

And there are still fears she could lose her other leg due to multiple fractures, her sister-in-law Chelsea Clarke says.

“It just shows the type of person she is, always putting other people before herself.”

Ruby worked “really hard” to train as a nurse and would “do anything for anyone”, Chelsea added.

The traumatised mum is now worrying about how she will be able to look after her baby and pay her mortgage and bills.

Chelsea said: “She was due to go back to work next month after being on maternity, and unfortunately, the injury will mean she won’t be able to return to work.

“Her partner Leon Clarke will also be unable to work as he will need to care for their little boy while she stays in In-hospital and even when she’s home recovering.

“It’s going to be a long rehabilitation process with more surgeries, physio and prosthetics.”

On Monday, the tragic incident happened as Ruby went to an Aldi as she prepared to start weaning her son off formula.

Chelsea said: “It’s so sad because she was so excited to go to Aldi and get avocados, broccoli and all the foods to blend and wean baby Leon.

“She went there so excited and was involved in such a traumatic and tragic accident.”

After Ruby was crushed between the cars, witnesses and staff from nearby Bidston Moss Retail Park shops rushed to her aid.

One worker wrapped up her legs and ripped open bedding quilts to make her feel more comfortable while police officers ran to get blankets and dummies for baby Leon.

Ruby was airlifted to Aintree University Hospital, where her right leg was amputated, and the other was put into a stabilising cage.

Chelsea and her sister Carly, 27, have set up a GoFundMe page to help Ruby and her family cover costs such as private medical bills, therapies and prosthetics.

Chelsea added: “Ruby’s home also needs adjustments made to ensure she has the best possible recovery and the smoothest transition back home when she can eventually return.

“I know money doesn’t solve everything, but in this situation, it really will as it will give the family the best possible chance.

“Ruby adores her partner and baby and is the kindest person you would ever meet; she would do anything for anyone.

“We’re heartbroken after the crash and just want to put her at ease.”

The page has raised more than £36,000 as of Thursday morning.