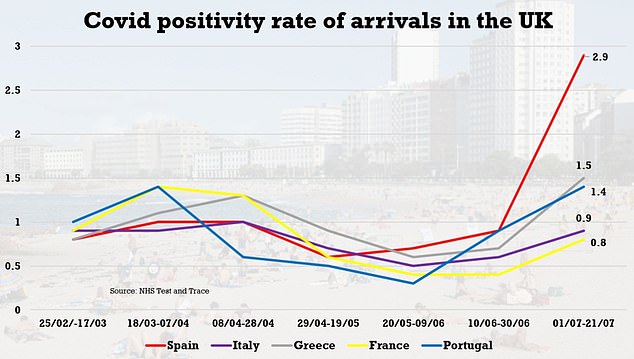 Whitehall ministers are preparing to cause summer holiday chaos by placing Spain on the red travel list shortly.

The reason ministers are prepared to cause holiday chaos during the peak holiday season is the sheer volume of infections rates of UK travellers returning from Spain’s holiday regions of the Costa Blanca and Costa del Sol.

Much of the spread of Covid to Brit holidaymakers are blamed on Spanish residents travelling down to the coasts from mainland cities such as Madrid.

The beaches in Spain are currently packed in the month of August, with Spanish residents in the ‘holiday month’ where Spain’s industry basically shuts down for the month, seeing thousands of Spanish residents head off to the coasts for their holiday time.

The travelling Spaniards appear to bring the Covid infections to the coasts.

Whilst the virus spreads, Brit’s in huge numbers compared to other countries are returning COVID positive.

Ministers are now preparing to act by placing Spain on the red travel list after studying the rise in infections.

A Whitehall minister in Cardiff today, after working in Whitehall all week, revealed how Spain is most likely to go red very shortly.

He said: ” Sadly the rate of returning Brit’s from Spain is far too high, at this rate we are going to be left with no option but to place Spain on the rest list, we know it will cause some disruption to the travel industry, but we really need to protect the nation.

“We have given enough opportunity to see if the high rates drop, but the data shows they haven’t, and we really aren’t left with any choice.” he finished.

Placing Spain on the red list will see the chaos for the travel industry and a financial disaster to British-owned businesses in Spain, who are blaming the Spanish themselves for the number of holidaymakers returning home, infected.

A bar and restaurant owner in Spain who didn’t wish to be named for fear of retribution from the Spanish told Global247news.

“August is the month they come down from the cities, sadly they bring infection with them, of course, they frequent Spanish bars and restaurants, and quite frankly they do not take as many precautions as the British owned operations, and so the virus spreads, we are likely to lose out due to the Spanish themselves,” said the disgruntled Brit bar owner in Fuengirola.