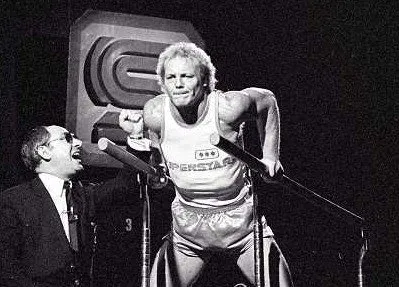 Adam Peaty MBE has taken to social media to express his thoughts and request that Superstars returns to British TV.

The outstanding British Athlete calls for all the Olympic champions to appear and contest with each other over multiple disciplines.

The rally call has the full agreement it appears with sports fans across the globe as the tweet started trending on Twitter.

It also triggered many memories of past years and especially the performances of the great Brian Jacks.

Fans started to reminisce the glory days of Jacks taking on all challengers, although many memories came flooding back.

Footballer Kevin Keegan crashing off his bike and Malcolm McDonald bursting down the 100-meter track in record Superstars time.

One of those sports fans, Mick Dore, said, “Used to love Superstars. Brian Jacks on the dips, Kevin Keegan ripping half his shoulder off, falling off the bike, Malcolm Macdonald winning the 100 metres. Great show it was. That and It’s a Knockout, bring em back!”

It appears its the sentiment of the nation, but sadly, according to Sports Agent Amber Lewis, it will never happen due to the money now in sport and the cost of insuring the stars; she told Global247news:

“Sadly, we will never see the show return; the insurance premiums would be far too high for the BBC or any other broadcaster.

“Can you imagine having to insure Jack Grealish against falling off his bike the way Keegan did?

“It just won’t happen in these modern times, but the tweet by Adam certainly brought back some fantastic memories of Brian Jacks and many others.

“What a great era that was”, she finished.

We need to bring back superstars, put all the Olympic champions together and see who wins out of the multiple disciplines 🤷🏼‍♂️