Banksy On Staycation In Suffolk Claims As New Art Appears 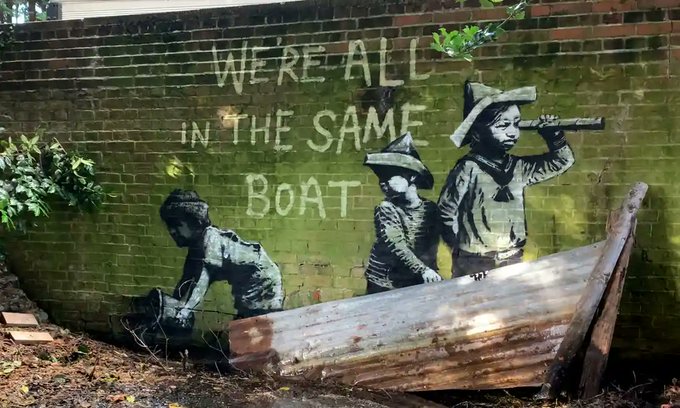 Fans of artist ‘Banksy’ feel he may be o a staycation holiday as artwork has appeared in Lowestoft and Great Yarmouth.

In Nicholas Everitt Park in Lowestoft, graffiti shows three children standing in a scrap-metal boat that has since been removed, with one looking back, one searching the horizon and one leaning over the side of the boat holding a bucket, with the message “We’re all in the same boat” written in the background.

Another possible Banksy adorns a wall outside a former electrical shop in Lowestoft, a town of about 70,000 people, which appears to show a child building a sandcastle next to a bit of dug-up road.

Although at present the world-famous graffiti artist has yet to claim the work as his but fans are convinced.

Chris Manlow, a huge fan of the artist went as far as to claim he thinks Banksy has got bored on holiday, he said:

“Its defo his work – he must have got bored whilst taking a staycation” he laughed before stating ” It has all his hallmarks – beautiful wall art, I expect him to come forward and claim it shortly”

Possible Banksy art appears in English coastal towns: https://t.co/0geTIgOU9g Not yet confirmed that art is the work of the anonymous artist Banksy, they have appeared in the east of England. Spotted in Lowestoft (Suffolk), Gorleston & Great Yarmouth in Norfolk. #Art #Banksy pic.twitter.com/eYciYAy2OQ