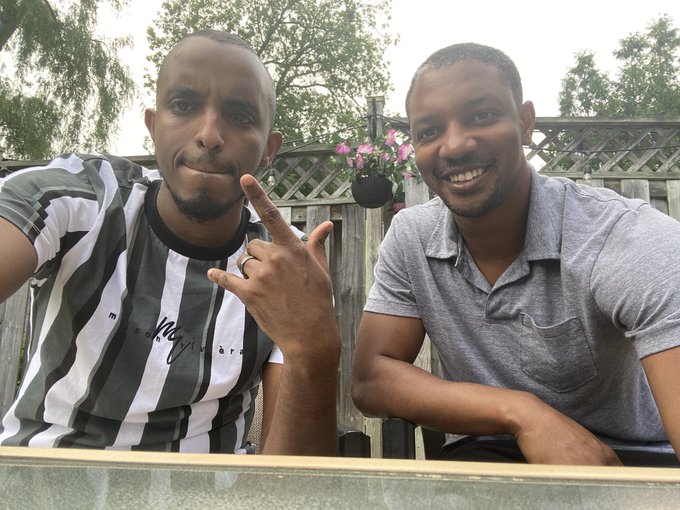 A Black supposed Arsenal supporter is profiteering from racism whilst the country attempts to stamp it out.

At a time when the headlines across the UK are all about racial abuse aimed at footballers on Twitter, one black man is profiteering from racism and using it as a tool for his alter ego.

As quite rightly, the globe is horrified by the thousands of racist messages sent via the social media channel Twitter to three English black players, a Canadian black man who goes by the Twitter handle of @ThekidEG is using the subject to make money whilst purporting to be an Arsenal supporter.

Global’s news investigating team were contacted by Twitter users to alert them of the going’s on, and the shocking revelation soon came to the forefront.

The man at the front of the profiteering from racism goes by the name of Egal, a black immigrant from Canada who had allegedly settled in North America years earlier from Africa.

After allegedly, according to sources, dumping his wife and leaving her behind in Canada, he made his next move to North London.

In an attempt to make a name for himself, he latched onto Arsenal Football Club, claiming to be a supporter, his main aim to clone the profits being generated by Arsenal TV, a YouTube show that generates a profit of circa 1 million pounds a year.

Firstly, he started making appearances as a guest on the show as a fan in the background before moving on to be the sidekick on another Arsenal show called ‘Sonny Unfiltered’, which was allegedly sold for £2,000.

After the money was banked and ditched by his sidekick ‘Sonny’, he went on to form EGTV.

During that time, he was caught out by viewers as a ‘fake’ Arsenal fan, once claiming that Robert Van Persie was the product of the Arsenal Academy live on air. However, he was a product as all real Arsenal and football fans are aware arrived from Feyernood, whilst on another occasion; he didn’t know who Arsenal legend Graham Rix was.

Whilst he feeds viewers to his EGTV show via Twitter posts, Egal has started to use racism as a promotional tool to do so.

As genuine football fans attempt this week to finally eradicate racism from football, as well as government ministers including the British PM Boris Johnson, Egal smelt the money and used the subject to try and promote himself and lead people to his show where he profits from advertising and charges viewers for asking questions, known as super chats, up to £5 at a time.

WTF Why are you doing a video on racism in British football if ur clearly not educated on the topic 🙄 pic.twitter.com/lsUuqXibOw

As genuine football supporters discussed how to get an end to racism and to believe it came from ‘keyboard warriors’ on Twitter who weren’t real football supporters, Egal decided to clip 2 secs of a show that lasted nearly 2 hours and claimed: “WTF why are you doing a video on racism in British football if you are not clearly educated on the subject?”

The show itself had black guests discussing the topic – although that didn’t suit Egal’s agenda.

His simple agenda was to clip a minuscule of footage, make a statement that generated just under 5,000 views and still counting, promoting himself and his revenue spinner EGTV.

How about you listen to the whole video before making Ludacris statements on that. They were breaking it down. And stop painting everyone in the video in a bad light. People like you and everyone who believes your garbage are what's wrong with twitter. Stirring the pot for likes

Football fans, themselves Black, were furious with the actions, clearly pointed out Egal was in it for the self-promotion.

One of those supporters, Randy, himself an Arsenal fan, told Global247news: ” Egal is a fraud, he’s not even a real fan, he milks Arsenal to make a profit, that’s all, he chooses Arsenal as we as a club have the biggest audiences on Social media and YouTube, everybody trying to be the next AFTV.

“He’s a total disgrace; it’s idiots like him that actually stoke up racism in football; as a black person himself, you would think he would be like those on the show he called out, who were debating how to get rid of it once and for all, but no instead he just saw an opportunity to make cash of it, he’s actually profiteering from racism.

These are the type of people who should be slung off Twitter as well as the racists,” said the aggravated Randy.

Another disgusted fan, Adam Brown, who himself presents his own show known as ‘Football With Brownie’ highlighted that it was a money-making cheap shot and cited Egal as a backstabber, Brown himself Latino, said:

“He’s nothing but a backstabber; one of those on the show was Sam Greenwood, a genuine Arsenal fan. Sam, whilst most Arsenal fans have seen Egal for being a fraud and using Arsenal to make money, stuck by him and tried to be a friend; this is how he treats him?

“It was a cheap money-making shot, and it’s totally disgusting that he’s used such a serious subject to cash in on; that’s the behaviour of pond life.

“I see he has been invited to go on the show and go face to face with the people he’s cited, but he won’t; he’s too gutless for that and knows he will be publicly exposed as a fraud.

“Cashing in on racism – DISGUSTING!” Brown shouted before supplying a link to where Arsenal fans called out Egal themselves.