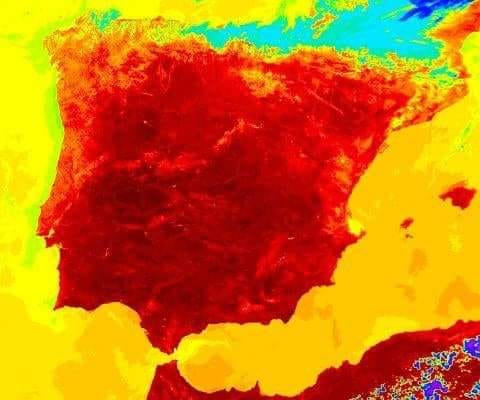 Canícula period to start with 40ºC-plus in the shade

What have the stars got to do with it?

THIS weekend will see 11 provinces in Spain on ‘alert’ for high temperatures. The period known as the Canícula starts up – the hottest part of the year, officially considered to be between July 15 and August 15 inclusive.
However, nowhere in Spain had broken any top temperature records so far – not even on Monday this week, when the average in most of the southern and eastern parts of the mainland hovered around 40ºC in the shade.
The name Canícula comes from the constellation Canis Major, which is Latin for ‘Greater Dog’ – there is a ‘Lesser Dog’, the Canis Minor, and both are usually depicted trailing the hunter, Orion – of which the brightest star is Sirius, or the ‘Dog Star’; brightest because it is close to the Solar System.
It was a widely-held belief among the Ancient Romans that, during this month, the heat of the sun blended with the heat emitted by Sirius, causing a sharp rise in temperatures, which is how this hottest part of a northern hemisphere year came to be named after the constellation.
Head of the meteorological institute Meteored, José Antonio Bermudas, says the month between July 15 and August 15 is termed in the trade as an ‘inter-summer drought’, not because of a water shortage but because of a ‘powerful anticyclone’.
This is not as terrifying as it sounds – in fact, it is the exact opposite of a cyclone and creates major atmospheric stability; other than being very hot, not much tends to happen on the weather front at this time of year.
Yet it is not necessarily the case that the top temperatures recorded in the year always come during the Canícula period – some of the record highs Spain has registered include July 4, 1994, when the mercury soared to 45.4ºC in Murcia, or on July 7, 2015, when it hit 44.5ºC in Zaragoza.
But if it’s guaranteed hot weather you want, there’s no chance of anything else in Spain between these dates, so it’s a good time to plan your holiday.
During the last week in July and the first week in August this year, Meteored is not expecting exceptional figures on the thermometer – nothing radically different to in any other year at this time, when temperatures tend to hover around the lower end of the 30s.
That said, this period of the Canícula is often marked by abnormally high temperatures in the northern third of the mainland, and it is forecast this will be the case in 2021.
Once into August, Meteored is predicting above-average temperatures nationwide – typically about 3ºC higher than normally seen.
Whilst Spain has yet to break any of its own heat records; Meteored says this may indeed happen over the next two or three days.
The weekend is expected to bring highs that could hit the 40ºC range in the regions of Andalucía, Extremadura, Castilla-La Mancha and Madrid.
Hotter-than-usual figures are expected this weekend in northern parts, including some of Spain’s traditionally coldest regions, such as Castilla y León, where it may reach around 35ºC in the shade – a figure also predicted for the Ebro valley and north-eastern Catalunya.