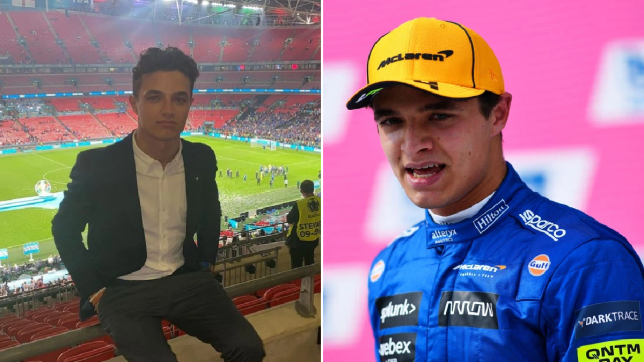 Lando Norris, the F1 Mclaren star, was mugged after watching England at Wembley.

As the penalty shoot-out drama finished at Wembley, F1 superstar Lando Norris was about to face a drama of his own.

Norris left the stadium shortly after the Italian victory, headed back to his Mclaren sports car parked outside the ground in the VIP section, only to be set upon by muggers.

Two men jumped out on the racing driver, with one putting him in a ‘bear hug’ whilst the other slithered his designer watch from his wrist.

Norris’ team, McLaren, confirmed the incident on Monday night in a brief statement, saying: ‘McLaren Racing can confirm that Lando Norris was involved in an incident, after the Euro 2020 final match at Wembley, during which the watch he was wearing was taken.

‘Thankfully, Lando was unharmed, but he is understandably shaken.

‘The team is supporting Lando, and we are sure that racing fans will join us in wishing him all the best for the British Grand Prix this weekend.

‘As this is now a police matter, we cannot comment further.’

The lack of security had been evident all night at the stadium as it’s now reported an extra 20,000 ticketless fans gained entry to the stadium with football once again being tarnished with its name dragged through the mud in the aftermath of England’s loss.

Norris himself is now preparing for this weekends British Grand Prix – A sport with a far more dignified audience.