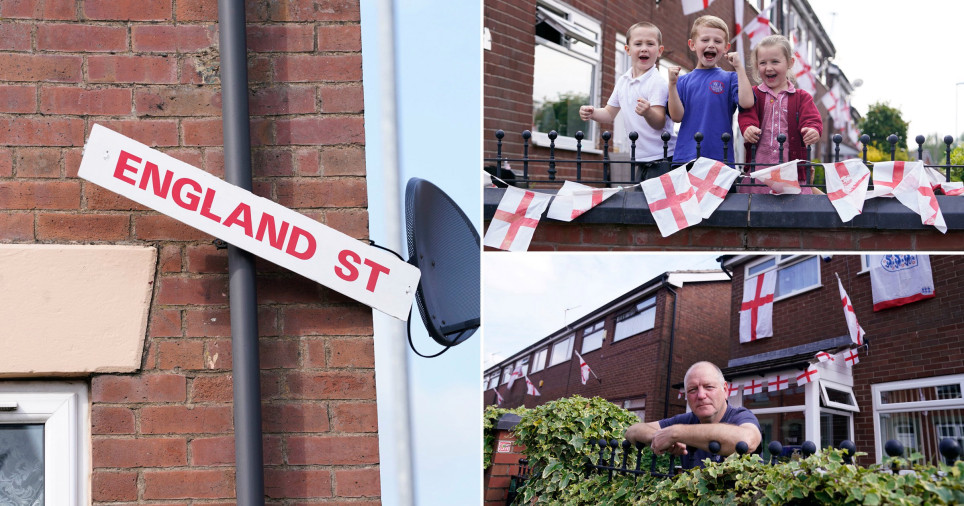 Oldham’s football fans have renamed their road England Street as excitement builds ahead of the Euro 2020 final.

The residents of Wales Street in Oldham have blanketed their homes in England flags and erected the ‘temporary’ new red and white sign above the original.

The road, which sits between Prince Charlie Street and Prince George Street, looks patriotic ahead of the Three Lions clash with Italy at Wembley on Sunday.

Many people will be watching the game from their living rooms, and street resident Eddie Leatherbarrow has been spotted with an assortment of England-themed flags flying from his home.

The change though has mainly come from the torrent of abuse from certain sectors of the Welsh fan base, as jealousy rampages throughout Wales.

The most notorious abuser, Adam Brown from Merthyr Tydfil, who has endlessly on his YouTube channel ‘Football With Brownie’, slammed everything English in a very abusive manner.

Brown, England fans feel has taken it a step too far with his foul-mouthed language and insults- now they are reacting.

West Ham supporter Richard Cox spoke with Global247news this morning, saying: ” I don’t blame them changing the name of the street; if I lived in Wales Street, I would be asking for a permanent change.

“We cheer on the Welsh; I have Welsh friends and enjoy what you could call ‘banter’ with them, but that Brown is way out of order, he doesn’t stop.

“He must be the most jealous Welshman in the UK; he will pick up on any point to dish out his bitterness.

Brown wasn’t available this morning for comment, although he released another shocking video targeting the English.

“He makes this video but I’ve seen him singing songs at Ninian Park related to a mass murderer Harold Shipman.

“On top of that, he’s sung so many songs about the English including even bringing Peter Sutcliffe into it, he’s demented,” said outraged Thomas.

“He’s nothing but a flaming hypocrite” he finished.