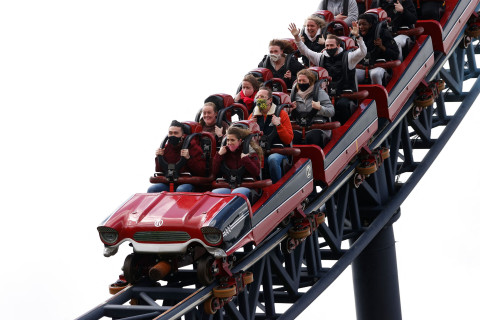 An eight-year-old girl suffering from cancer has been spat on.

Her family believe it was because of her bald head.

As the family were preparing to leave four teenage boys spat on them from overhead.

The disgusting incident was caught on the park’s CCTV and police hope that witnesses or relatives will recognise them and come forward.

A Surrey police spokesman said, “The parents were concerned that their eight-year-old daughter had been deliberately targeted because she has a shaved head due to cancer treatment.”

The police issued an appeal on Friday regarding the unsolved incident, which took place on 6th June, saying “Between 6 pm and 7 pm, a family of four were passing the information desk on the water slides by The Dome on their way out of the park. As they walked out, a group of four teenage boys waiting in line on the staircase for a water slide started spitting at them.

The boy who spat on the informant’s daughter was described as Mediterranean, with curly black-brown hair and wearing a black t-shirt.

The other boys were described as white. One had short blonde hair and wore a black t-shirt and grey tracksuit bottoms. One was wearing shorts and a t-shirt with a side pouch.”