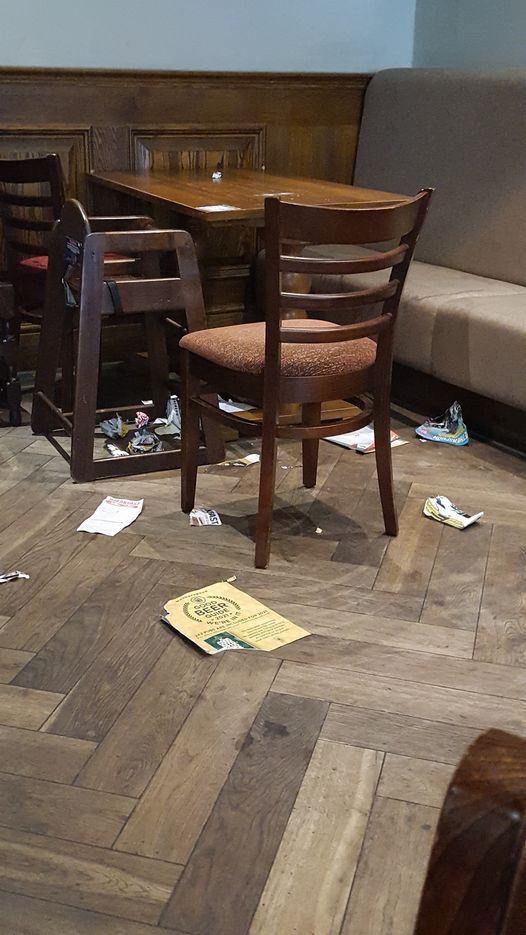 Bideford in North Devon has seen its residents come forward and slam parents out with their children as disgusting pigs.

The incident that caused a ruckus in the quaint North Devon town occurred yesterday when two parents took their children into the local Wetherspoons for breakfast.

According to eyewitnesses present, the parents had no interest in their children whilst they scoffed down their egg and bacon breakfasts and swelled it down with pints of lager.

Meanwhile, as the parents indulged in their alcohol-fuelled breakfast, their children ripped up everything in sight and threw it to the floor, whilst their parents totally ignored the mess before departing.

Graham Wilkinson from the town contacted Global247news wishing to shame the unknown parents and provided photo evidence of the family trash left behind for pub staff to clean up.

Graham told Global247news: “They were animals, not humans and people like this give our town a nasty reputation.

“After all these lockdowns, Bideford is heavily reliant on tourism, but who’s going to wish to visit if locals are going to behave in this manner?

“There’s no excuse for it at all; I know many of the town residents are furious too; it’s all over social media.

“It would have taken those slobs 2 mins to pick up their kid’s trash, but they just ignored it all”, he reported.

Roo Williamson summed it up on social media as she hit out, “I’d hate to think what sort of scummy homes those children live in; their parents must be total stinking slobs!”

On seeing the images, Donna Prouse questioned: “Did they feed the kids looks like they ate the menus?”

The situation has clearly left a bad taste in the mouth as Bidefords cleaner element of their town struck out with hundreds of comments dissing the unknown slobs.

The last word was saved though for local Graham who called upon Bideford residents to clean up their act:

“We don’t want the UK thinking we are a stinking dirty town, it’s for all our benefits to clean up our act” he stormed.