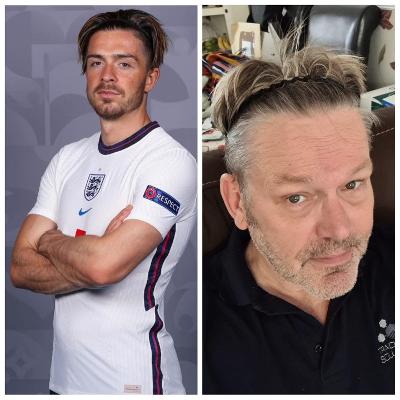 A Yeovil window cleaner has gone for a Grealish hairstyle in an attempt to woo women customers.

Adrian Vincent, who operates a window cleaning operation in South Somerset called Trade Solutions, has decided to turn on the style to attract new business and reach out to female customers.

Vincent, who over the years has self-claimed to be one of the most handsome men in the Somerset town, even modelling in his younger days for Screwfix, had in recent times let himself go.

Since the days of being a Screwfix model in their mail catalogue, Vincent started his own cleaning operation. As customers pointed out, whilst his cleaning service was superb, his looks had dropped quicker than a sponge from the top of the top a ladder.

Now taking the point on board from customers to his appearance, 55-year-old Adrian has stepped up the game.

Vincent, who’s good lady wife, is one of the top Somerset hairdressers, has given him a Grealish’ and bookings are flying in quicker than a Jack Grealish cross say sources within the Trade Solutions company.

The source said: “He’s swanning around as if he really is Jack Grealish; he’s even changed his walking style, but bookings, especially for women, are pouring in.”

One of those new customers Sybil Lewis from Odcombe, told Global247news how she booked up for a clean twice a month, she said:

“Doesn’t he look lovely! When I saw the latest picture on social media, it gave me a little flutter.

” I’ve shown all my friends, and they like me are changing window cleaners – you always want a good looking one at my age”, she giggled.

Although pals of Adrian have a different take on the matter, Steve Williams said: ” He’s always been off his rocker, but I think he’s gone a bit too far this time, not so much the hairstyle itself but the way he’s strutting around posing although It’s an improvement on seeing him in his hot tub with a can of Thatchers.”

“The change of appearance won’t stop him getting banned by Facebook, though, will it? ” laughed Danny Dickinson, referring to the 115 times the window cleaner has been booted off the social media channel.

Adrian himself was unavailable for comment when we called his office; the young man called Sam said, ” He’s having his eyebrows plucked currently he could be a few hours”