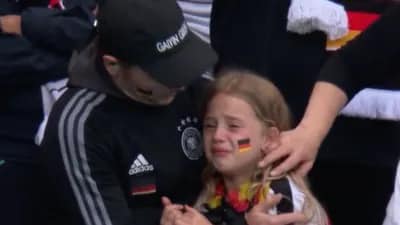 A Wales football fan has raised thousands of pounds for a young German child, who was mocked online after England’s victory over Germany at Wembley.

The girl was the subject of abuse after she was pictured crying on television and on the big screen at the stadium.
Since launching an online campaign to show that “not everyone from the UK is horrible”, Joel Hughes has so far raised more than £9,000 after initially setting a £500 target.
The web developer is also trying to find the girl’s family to hand over the money.
Hughes said the abuse of the girl is “pretty horrible – to put it mildly.”
He added: “No, I don’t think this will change the world. But it can do one thing for that little girl.”
Although more hardened fans don’t agree and feel the money-raising is pathetic and pointless.
Trev Bailey, a West Ham and England supporter, slammed the Welsh fundraising, telling Global247news:
“What a load of rubbish and completely embarrassing – it’s once again the Welsh point-scoring against us English.
“Listen, I’m not heartless but if you are going to take your kid to football, losing is part of the game, as well as is the banter.
“Raising money for a kid is rather sick really; that type of wedge could go to a far better cause, it was just a few tears because her team lost, this is typical of the snowflake society of today”, he finished.