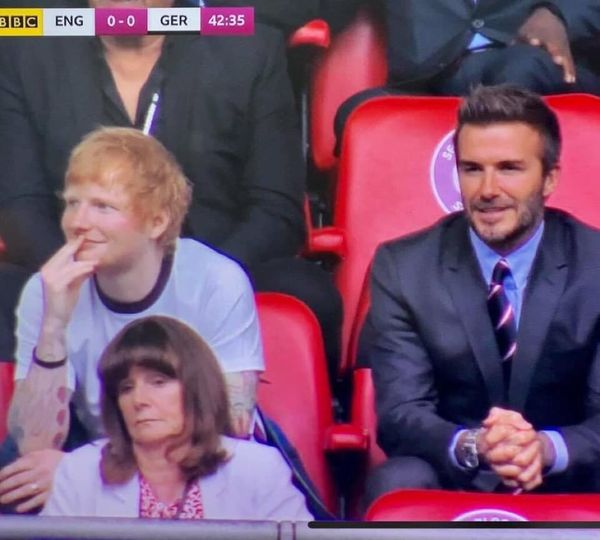 A woman from Talbot Green phone has gone into meltdown after Beck’s pic on National TV.

As England played Germany yesterday at Wembley, a game that saw England through to the quarter-finals, camera’s swung to David Beckham.

Although the screenshot has become a nightmare for a Talbot Green woman since the picture shot across Social media.

Kath Ridley, a grandmother in Talbot Green, was mistaken as being sat in front of David Beckham, and her phone hasn’t stopped.

Ridley says she has not had a minutes peace since the picture shot around the globe as thousands mistook her for a woman in the posh seats at yesterdays game.

She told Global247news this morning: “I didn’t know what the hell was going on, I was shopping in Talbot Green Tesco’s, and my phone went bloody mental mun.

“I was in line at the checkout, and it constantly rang;  soon as I cut one call, it went to another and another, that’s on top of a stream of bleeps coming in as text messages bombarded into my phone.

“Everyone was looking at me stupid mun; the poor girl on the checkout was wetting herself laughing as I went into a dither.

“I had to turn my phone off; it was only when I got outside that I read the messages and thought, what the hell are they on about? asking questions about David Beckham.

“It was only when I got home and showed my Grandaughter Kimberley and asked her to take me to Carphone Warehouse to complain that we discovered it wasn’t a fault; I felt such a fool,” said the grandmother.

“Here, look he said, as he showed me images on his own phone, she looks exactly like you!”

Whilst the grandmother recovers from the shock, her phone is still constantly receiving messages, although she now has seen the funny side but wishes to tell people it’s not her.

“Please get the word out; it really isn’t me,” she asked Global247news.