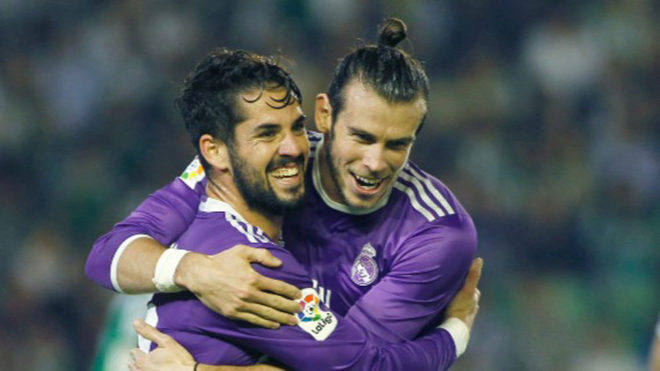 As speculation continues to the future of Real Madrid’s Gareth Bale, it appears it’s improbable he will remain in Spain.

In Wales, there is heavy speculation that Bale will, by mutual consent, terminate his contract shortly with the club and return home.

Bookmakers in the UK lowering the odds that the Welshman will sign off his footballing playing career from 33/1 to 2/1. also sense the move is going to take place in the next few weeks.

Now it’s not just fans and bookmakers adding fuel to the fire as teammate Isco and close friend of the Welsh player today revealed his thoughts and knowledge on the matter.

Isco, who came home to Benalmadena to celebrate San Juan with his family this week, this afternoon was speaking in Las Arenas rooftop bar and said:

‘ Gareth is a lovely man, and I was sad to see him and his team go out of the Euros yesterday; I know he will be hurt, but as he knows, he has plenty of more time with Wales.

‘We are very close friends for several years now, and he has always expressed his desire to play for his home town club in Wales and from what I understand, that dream is about to take place for him.

‘Whilst I know he will be emotionally upset at present, he will recover and will set his focus on his Welsh dream.’

Isco, who himself was left out of the Spanish squad, also says he doesn’t know currently where his future lies.

‘It’s been a strange season, and with a new manager will come new ideas, he said

‘I hope to remain with Madrid’, he said whilst refuting local news stories he was back in Benalmadena for talks with former club Malaga CF.

‘ No, no, I am home to celebrate San Juan with the family, that’s all, and we return home next week.’ he confirmed.