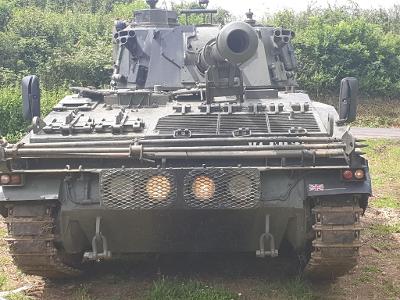 A Tank owner who was given a parking ticket on his tank in Weymouth has blasted the Dorset County Council for not being able to read.

A tank owner took his Abbot tank down to the seaside in Dorset’s Weymouth and came away with a parking ticket after the tank broke down.

Colvyn Gillmon had taken his prized Abbot Tank down to the seafront to celebrate locally organised veterans day.

As it arrived in Weymouth, it started to have gearbox issues, so he transported it to the North Forte by the Harbour.

As punters flocked to continue to see the tank and the efforts of Mr Gillmon, who had left posters all over the tank about veterans day as well as a contact number if the broken-down tank was getting in anyone way whilst explaining it had actually broken down, an overzealous parking warden from Dorset county council still slapped it with a parking ticket.

An eye witness at the time of the ticket, Kevin Coleman, couldn’t believe what he was seeing and told Global247news of what’s transpired since he said:

“I was looking at the tank when the ticket warden approached; I pointed out to him the big sign that stated it had broken down.

“He just replied he didn’t care as he was just doing his job.

“He asked if I was the owner of the tank, and when I said no, he told me to mind my own business after I demonstrated the fact that a kind man clearly had brought a tank to veterans day for others pleasure.

“He was just interested in issuing the ticket and said he would call the police if I engaged with him any further; as he walked away, he said the tank owner would have the right to appeal the ticket.”

That’s exactly what it transpires that the owner did.

He posted: ” Got an email back today, saying, ‘Sorry your truck broke down, but we can’t cancel the PCN it’s not that easy we need more information.’

“No, you muppets, you need to learn to read first”, stormed the tank owner.

“Looks like I will have to buy them some Peter & Jane books”, he finished.

Meanwhile, Kevin Coleman says, ” It’s typical of Dorset Council, what idiot can’t tell the difference between a truck and a bleeding huge tank and the council need more f….. details!”

Dorset county council were contacted this morning but appeared to be unavailable, possibly having reading lessons?