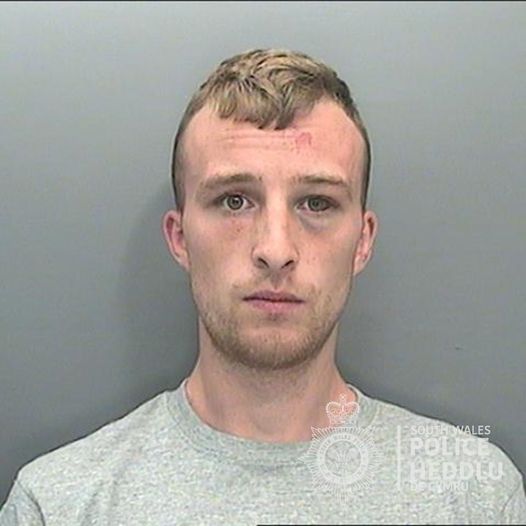 A man from Pontypridd has been jailed for spitting at a police officer when he was arrested following a disturbance in the town centre on 14th June 2021.

Taylor Rees, 24, of Mill Street, was spotted shouting and swearing at people by a PCSO who was patrolling the town centre on 14th June at approximately 6.45 pm.
.
Rees refused to calm down, taking his top off and swearing at hostel staff who refuse him entry because of his behaviour.
Rees continued being aggressive while the town PCSO followed Rees along Broadway, calling for police officer assistance.
Officers arrived minutes later to arrest him, but he resisted. As he was being led to a nearby police van, he turned and spat towards the arresting officer. Seconds later, he spat again at the officer’s head before being taken into custody.
He was in breach of a previous community sentence charged with using threatening behaviour and assaulting a police officer. On 15th June, he was jailed for 26 weeks at Merthyr Magistrates Court.
Chief Inspector Anthony Williams said:” Our priority is to keep Pontypridd town a place where everybody can enjoy, and we are constantly working with our partners to ensure it stays that way. We will continue to identify those who cause trouble and intimidate others. Anybody who thinks it is okay to assault a police officer in any way is likely to find themselves behind bars.”
Advertisement