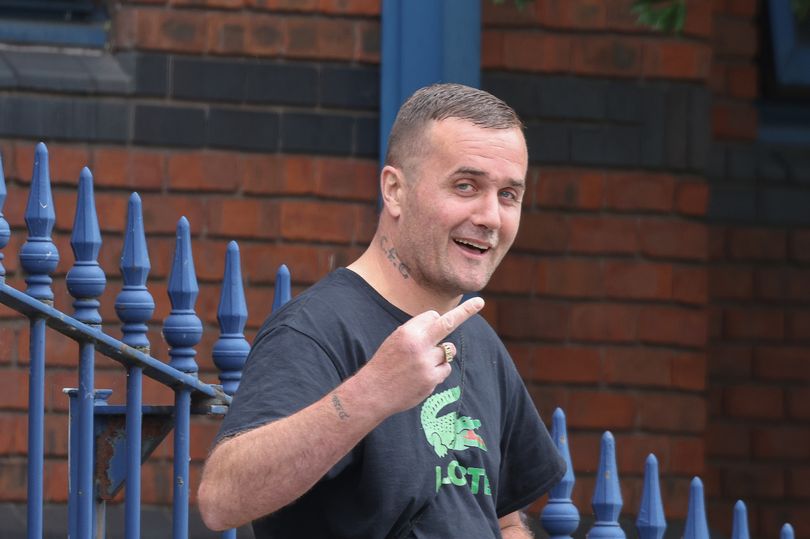 Wilkins, a career criminal, wasn’t impressed with snappers this morning as he entered the court and delivered a middle finger salute.

The career criminal was entering court this morning in Stoke for his 110th charge.

The charge this time was for supplying drugs he advertised as the best ammo in Fenton.

Stoke court heard during the hearing; police forced their way into his home in Christchurch Street, Fenton.

Once inside, officers found a bag containing four separate bags of cannabis worth £1,300, as well as £800 cash and a tick list.

Wilkins was jailed for 12 months after ‘immediate custody’ was deemed the only appropriate sentence.

Andrew Baker, prosecuting, said a warrant was executed at the address on November 27, 2019.

He added: “During the search, the defendant returned with his long-term partner. Her phone contained eight messages sent between September 3 and 17 offering to sell a variety of cannabis.

“The defendant would supply lower end dealers with up to an ounce which they could then break down.

Watkins pleaded guilty, to take yet another sentence and another trip back to jail.

Judge Paul Glenn told Watkins sternly: “You have a pretty appalling criminal history back to 1999, and there are 109 offences you have been convicted of. You are a prolific offender.

“Offences came to light on November 27, 2019, when police raided your house. They found cannabis concealed within roof space. There were over 163 grams worth £1,300. They found a notebook which was a tick list. They also found further cannabis and digital scales.

“They took possession of your partner’s phone, and it proved you made eight calls offering to supply cannabis. You advertised your prices and described it as ‘the best ammo in Fenton’.