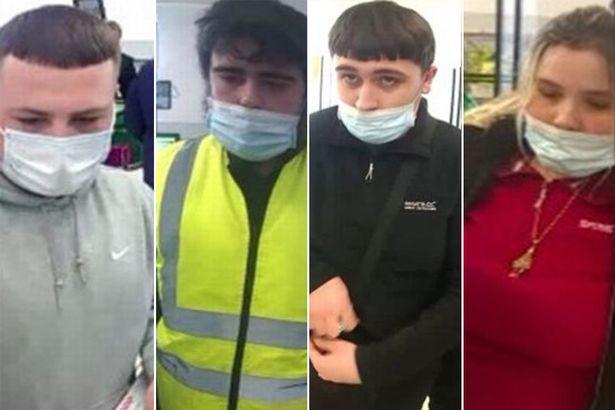 An investigation was launched after thieves walked out of an Asda superstore having underpaid £1,300 worth of shopping.

Police have issued images of four people they are keen to speak to regarding a transaction made on March 21 at a branch in Birmingham.

In the footage, the buyers are seen scanning several electrical goods at a self-service checkout in Minworth, Sutton Coldfield, at around 11 am

The goods, worth £1,300 in total, were swiped through a self-service till in the city-centre store.

Police confirmed that items worth “several hundred pounds” each, including Sharp electrical items, were put through the till, but the correct amounts were not paid.

“We want to speak to them after electrical goods worth £1,300 were taken from Asda supermarket in Walmley Ash Road, Minworth in Sutton Coldfield.

“Several items, each worth several hundred pounds, were passed through a self-service till between 11 am on Sunday 21 March, and 11 am Monday 22 March, but the correct amounts were not paid for them.”

The statement continued: “Our enquiries are ongoing, and we understand that those involved drove away in a Vauxhall Zafira registration number BN56 YEE.”

“If you know any of the three men and the woman in the image or know anything about the Vauxhall car, please let us know.