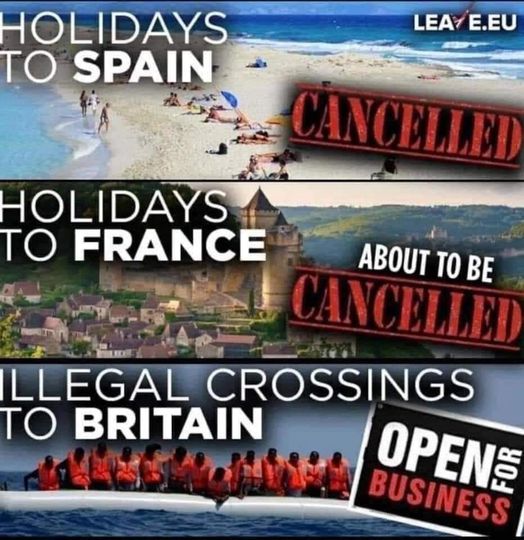 UK residents wishing to go on a foreign holiday have turned their frustrations on asylum seekers.

After a week of seeing the UK Prime Minister Boris Johnson and his government leave the likes of Spain under Amber and removing Portugal from the Green list, frustrations are at boiling point in the UK with those wishing to travel abroad for a holiday.

That frustration has led to frustrated ‘want to go’ holidaymakers taking it out on asylum seekers.

Asylum seekers escaping to the UK from war-torn countries are now taking the full brunt of seasoned travellers annoyance.

The annoyance and frustration appear to have hit a flashpoint, as UK courts recently judged that asylum seekers should not be detained in government ‘Army Camps’ but be placed in hotels, whilst holidaymakers feel they are being restricted to the shores of the UK.

Now aggressive images are being flashed across social media by frustrated citizens across the UK, clearly citing their frustration. However, the poor tasting messages have left divided opinions as holiday rows continue.

Richard Cox was one of the first to call the Global247news desk to vent his anger; Cox from Bruton in Somerset stormed: ‘This is totally sick and racist too, there’s no comparison to people trying to flee war, risking their lives doing so, compared to some saddo who wants to go for a two week holiday in the sun.

‘Want to be holidaymakers need to grow up and take a good hard look at themselves and get a grip.

‘Go in the holiday Facebook groups and read their moans and groans. Don’t they want to be safe?.

‘Look, we all like a holiday like the next person, but it’s no big deal giving up having one for a year, and you can still support your own country by taking a staycation.

‘Turning racist though is despicable just because people can’t have a holiday; these people need a head wobble; there’s no comparison to being a poor frightened asylum seeker to a bleeding wannabe holiday maker’, he stormed.

‘Where’s their compassion?’ asks Tim Harvey from Cardiff ‘ Do wannabe selfish holidaymakers really believe these people wish to risk their lives for the sake of £37 per week and a roof over their head?

Although Brian Blatch, a regular to Spain’s Benidorm, when contacted, said:

‘It’s just frustration, that’s all, simply because the government have messed up totally.

‘ Firstly, the government shouldn’t raise hopes in the first place, take Portugal that’s been a shambles, and then we have the likes of Benidorm that have lower rates than in the UK.

‘When you have situations where you can’t travel to the likes of Benidorm when it is as safe as houses, frustration is bound to spill over, as it has.

‘ The government are playing games with peoples emotions, and that’s what has triggered this off – nothing else.

‘It would have been far better to say simply no holidays In 2021 rather than all this nonsense’, he finished.