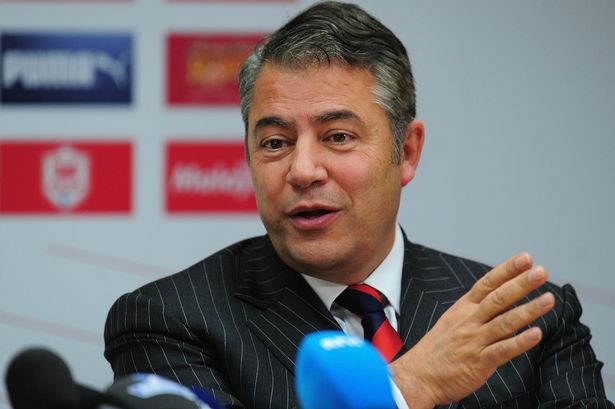 Adam Brown, the presenter of Football With Brownie, retaliates and calls on Cardiff Chairman to tell the truth.

In the ongoing dispute between football show presenter Adam Brown, who presents the popular football show ‘Football With Brownie’ and the Cardiff Chairman, who Brown cites as a liar, Brown has now come forward to call on the Chairman the opportunity to state his case face to face.

Brown who has been criticised by a section of supporters of the Welsh as it appeared he would not make the call, whilst they summed him up as a ‘bottler’, appears to have made a U-Turn as he filmed from a shoddy looking beach in Marbella.

Brown, who was incensed after the Chairman announced live on YouTube that the football club has no debts apart from loans from club owner Vincent Tan.

Whilst Brown feels this is not the facts and directs supporters to look at the newly published accounts that show ‘Other loans” to the tune of nearly 40 million GBP.

Despite some supporters pointing out that the ‘other loans’ are owed to Tan’s companies – Brown furthermore highlights the fact that Dalman stated he takes no salary, whilst Brown claims he does and further feels Dalman is schmoozing the club’s supporters with as he calls it ‘sales talk.’

Brown claims the accounts clearly show that the Chairman’s company is paid high consultancy fees, whilst he refutes the near 40 million loans are owed to Tan’s companies.

Now fans of the club call for the pair to have a live face to face conversation on the show to clear up matters.

Danny Hughes said: “It’s the only way to get this sorted; Brownie has offered our Chairman the opportunity to answer his accusations; what has Dalman got to lose if he’s telling the truth?

“If Brown is correct, though, I expect Dalman will duck out of any such interview”, he added.

The big question now is whether the Cardiff City Chairman will defend and rectify his recent comments, although City fan, Dai Lewis, doesn’t feel he will and refers to him as another Peter Ridsdale, saying:

“We’ve seen this all before at City from different owners, especially the likes of Peter Ridsdale; I think Brownie has caught him out telling porkies and pulled his pants down if I’m honest.

“I don’t actually like Brown; he’s full of self-importance, but on this occasion, I think he’s hit the nail on the head and exposed the Chairman as a liar.”