Indians will still be deported from Glasgow despite van release

May 20, 2021 Indians will still be deported from Glasgow despite van release 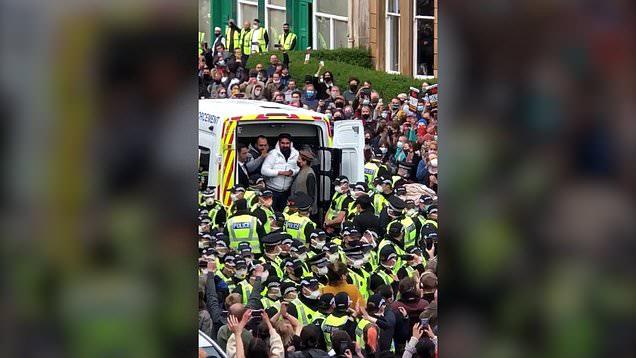 Two men who were released from the back of an immigration van in Glasgow after 200 people flooded the street will still be deported, it has been claimed.

Lakhvir Singh, 34, and Sumit Sehdevi, both of whom are Indian nationals and have been living in the UK for 10 years, were detained when officers from the UK Border Agency raided a property in Glasgow’s southside on May 13.

Police then released the men on public safety grounds after hundreds of protesters blocked the van from leaving, with one person even lying underneath the vehicle.

However, a Home Office source has now said the demonstration has only delayed the ‘inevitable’ action against the two men.

They told The Times: ‘They will still be detained and deported at a later date. We will continue to tackle illegal immigration and the harm it causes.’

Both men are members of the area’s Sikh Gurdwara temple, where they have previously worked to help the homeless. Refugee and migrant charity Positive Action in Housing described the pair as ‘part of a community.