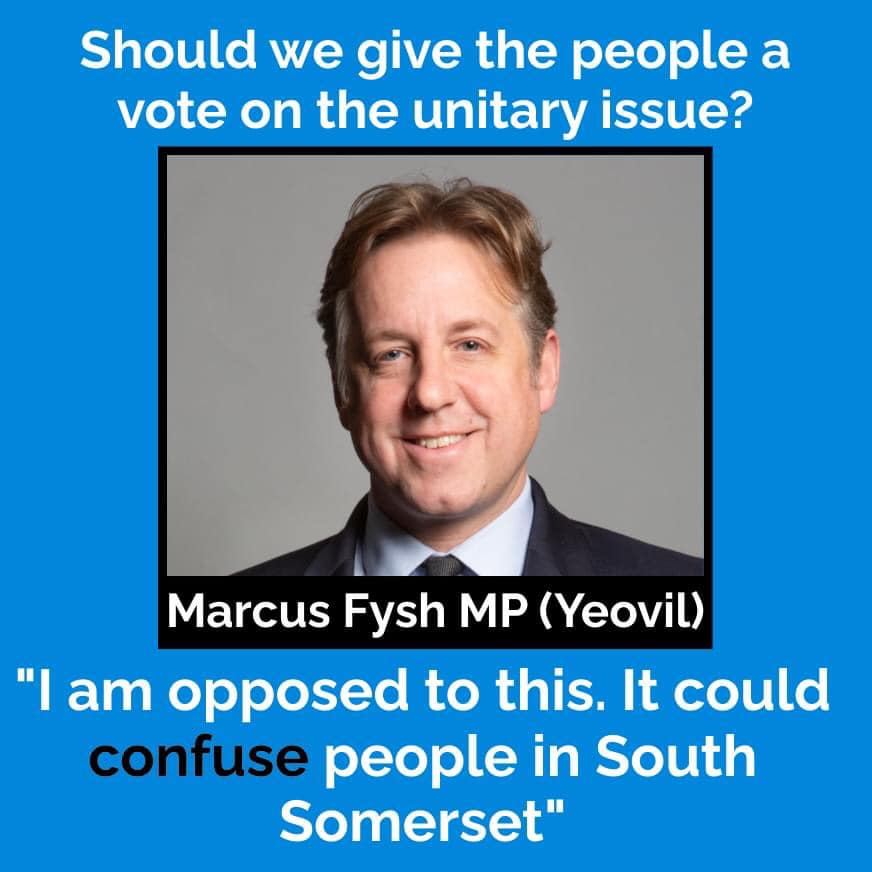 Yeovil’s MP Marcus Fysh once again rattles his constituency as he calls a council poll a publicity stunt.

Marcus Fysh, the MP for Yeovil in Somerset, has once again put his ‘foot in it’ within his own constituency.

The latest episode of the largest despised Tory MP has come as he has called out the council’s request for a second unitary poll.

Fysh has branded it a ‘political publicity stunt.

The MP who courts one of the largest expenses lists from the House Of Commons at a staggering eighty thousand pounds plus on top of his £79,000 salary is not new to upsetting the residents of Yeovil.

Although once again, he’s caused a massive backlash to his latest spoutings.

Mr Fysh said the first consultation “allowed everyone in Somerset to have their say” on the proposals.

He said: “I have encouraged all to get involved in this repeatedly over the last few months, and thousands of submissions have been received.

“The district councils aren’t even planning to describe their overly complex and money-wasting proposal properly in the question they intend to put.”

The question the councils will pose to residents through the poll is:

“Which of the two options for change in local government in Somerset to replace the existing five councils do you support (select one only):

a. One council for Somerset (‘One Somerset’ – the plan for a single council proposed by Somerset County Council)

Although Fysh appears to have been hit with large criticism since his comments were published.

Sharon Drew, said ‘He’s crawled out the woodwork then again’ in reference to the claims of many they haven’t heard from their MP for a long while, others not even having responses to letters of communication.

whilst a conservative supporter, Mark Grindy denounced his own parties MP saying:

He is a muppet and should not be at any party. Absolute waste of taxpayers money.

I’m conservative through and through, but I will throw my vote to green, just not to vote for him.

Meanwhile, Geoff Hallet was one of many carrying the same sentiment as he commented, “Marcus Fish was and had nothing to do with South Somerset. If he had, he would listen to his constituents; Mark my words, he could pay for this at the next election.”

The opposition to the MP’s comments is continuing to pour in.

Although one resident of the town, another Conservative voter, had the most sything attack, he told Global247news:

“Marcus Fysh is a fraud of an MP; he is what you call a career politician; he doesn’t care about the local community; the only person he cares about is himself.

“He’s chasing a Cabinet position; he always has done, often backstabbing Prime Ministers when it suited in an attempt to win a cabinet position.

“We all saw how he sided up to Boris and quickly dumped out on May.

“As well as that, he doesn’t give a rats arse about local issues and doesn’t like being questioned either upon the subject, I’ve questioned him a few times through different channels, and he simply blocks you.”

The businessman further confessed: ” I have now stopped my contributions to the Tory party until the baffoon Fysh has departed from this area, let’s be honest he only got back in last time due to lack of opposition.

“He talks out his backside and is an embarrassment to the party” he finished.