Potential Dog KILLERS on the loose in Yeovil As Vigilantes Prepare

May 4, 2021 Potential Dog KILLERS on the loose in Yeovil As Vigilantes Prepare 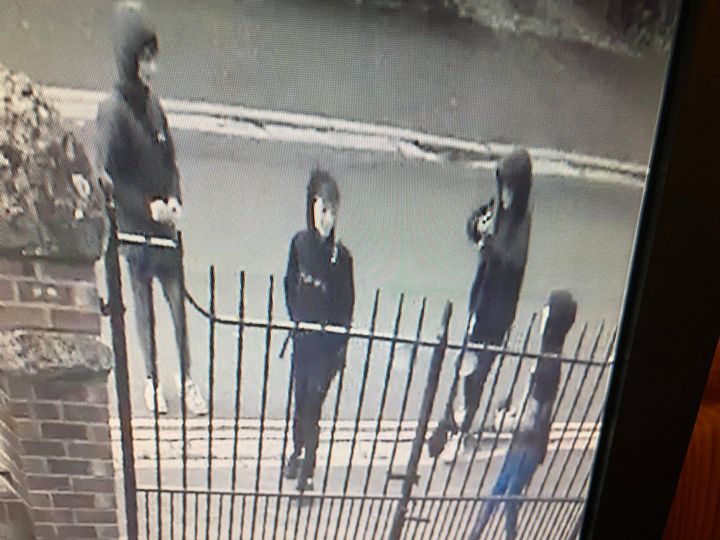 A nasty bunch of yobs are hitting the streets of Yeovil in Somerset intent daily of causing havoc and destruction.

In the havoc they are causing, killing dogs with intent is one of the complaints of residents.

The unruly mob have been sighted opening garden gates to allow residents dogs onto the main roads of the town.

One resident reported that they had heard the gang shout as they open gates, ” Who let the dogs out” whilst also chanting “, Let them die in the traffic.”

One resident contacting Global247news who wished to remain unnamed for fear of reprisals said: ” These brats are intended on killing dogs by letting them onto main roads to get knocked over.

” They opened up my back gate clearly knowing my three dogs were in the back garden – all three escaped, but thankfully Rowan Way was quiet at the time with little traffic.

“If they had got as far as Lysander Road, it could have been a totally different matter.” said the concerned dog owner.

Does anyone know these four little pillars of the community? One with a scooter, one wearing blue jeans. Just before 2 pm in Grove Avenue, they tried to kill our two dogs!

Whilst Mr Dening captured them in Grove Avenue, it appears as residents are calling them ‘little scrotes’ are covering a wide area of the town.

Reports have also come in of them throwing stones and eggs at residents cars in Abbey Manor Park, but the main concern is the welfare of dogs and them being released onto the roads to die.

So much so as residents in the market town have reported the actions to the local police, with little action being taken now, a vigilante group of old hardened ‘hard nuts’ are determined to tackle the issue.

Speaking exclusively to Global247news outside Coopers Mill yesterday, one said:

” When it comes to dogs, this is not on; if the police aren’t going to do anything about it, we will”, revealed the heavily tattooed former skinhead.

He added, “A few lads and I have set up a Whatsapp group. As soon as they are spotted, we will respond, and all I will say if these are your little scrotes, be very prepared.

“We are not prepared to put up with this in this town; there’s nearly 25 of us in the group, old battlers from the Carnaby’s days.

“But don’t underestimate us if we catch your kid trying to kill dogs, let’s say they will pay”, he stormed.

It appears that the vigilante group will have the full support of the town’s residents, one going as far as saying, ” 4 more to add to the zap list.”

Whilst another, Ali Price, hopes the police capture them first as she commented: “Let’s hope the police get them first before anyone else as I would chop their flaming hands-off.”

It now looks like the town police better step up to the mark as hundreds of outraged residents are turning nasty, already revealing that the mob reside on Stiby Road as well as revealing despite their young age are fuelled on Vodka.

A security guard in the local Range store who recently encountered the mob before ejecting them from his store revealed: They were off their faces on booze, they are only about 11 years old, where are the parents?” he questioned.

He then admitted, “I have spoken to the vigilante group; they have already been up here after they heard about it kicking off, that’s all I’m going to say apart from I wouldn’t want to be caught by them, that’s for sure.”

The gang are reported to be operating on electric scooters, as one resident revealed as he called for them to be locked up. However, with many angry residents in the town, it doesn’t look long until action is taken either way.

It remains to be seen if the Yeovil Police Force is up to the job!

“I passed them on the road walking back to my car at around 2 pm. One of them had a big handful of stones in his hand. Just looking for trouble. Horrible human beings.

“One stepped out into the road just as a car approached him, coming up Grove avenue from Preston Grove. Didn’t give a toss.
“One was riding a scooter on and off the pavement like an idiot. I was on the other side of the road. They were an accident waiting to happen.

“I hope they are caught. They need locking up! Idiots.”