May 3, 2021 OUTRAGE in Wales as its discovered Welsh Ministers Spend 12 Grand On Taxis In 6 Months 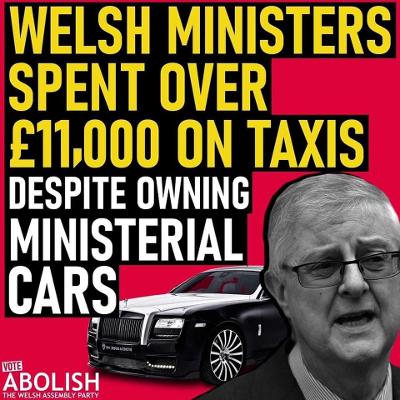 Citizens in Wales have been outraged upon hearing that their ministers in the Welsh government had spent nearly 12 grand on taxis in just 6 months.

Now, as the costs are revealed, outrage is pouring through the towns and cities of Wales.

Richard Massey, from Ystradown, who operates his own cab firm in Cowbridge, told Global247news of his disgust despite running taxis himself, Richard said:

“This is a complete joke and one of the reasons the talk shop Welsh government should be abolished.

“They have ministerial cars but still wack up the taxpayer a bill like that, and they are taking the piss.

“Why can’t they get on public transport as they advocate the rest of us.

“I’m staggered beyond belief by their actions; it’s farcical and a slap in the place to us law-abiding tax-paying Welsh citizens.

Massey isn’t the only person aggravated by the ministers spending.

“These ministers we have are power-hungry people who feel they are above us normal people in Wales.

“They must regard us as peasants and think we can’t speak up for ourselves, whilst I was a supporter of having a Welsh government at first, now I have totally changed my mind and feel it should be abolished.

“This is just one example of many I’m afraid of their incompetence”, he finished.