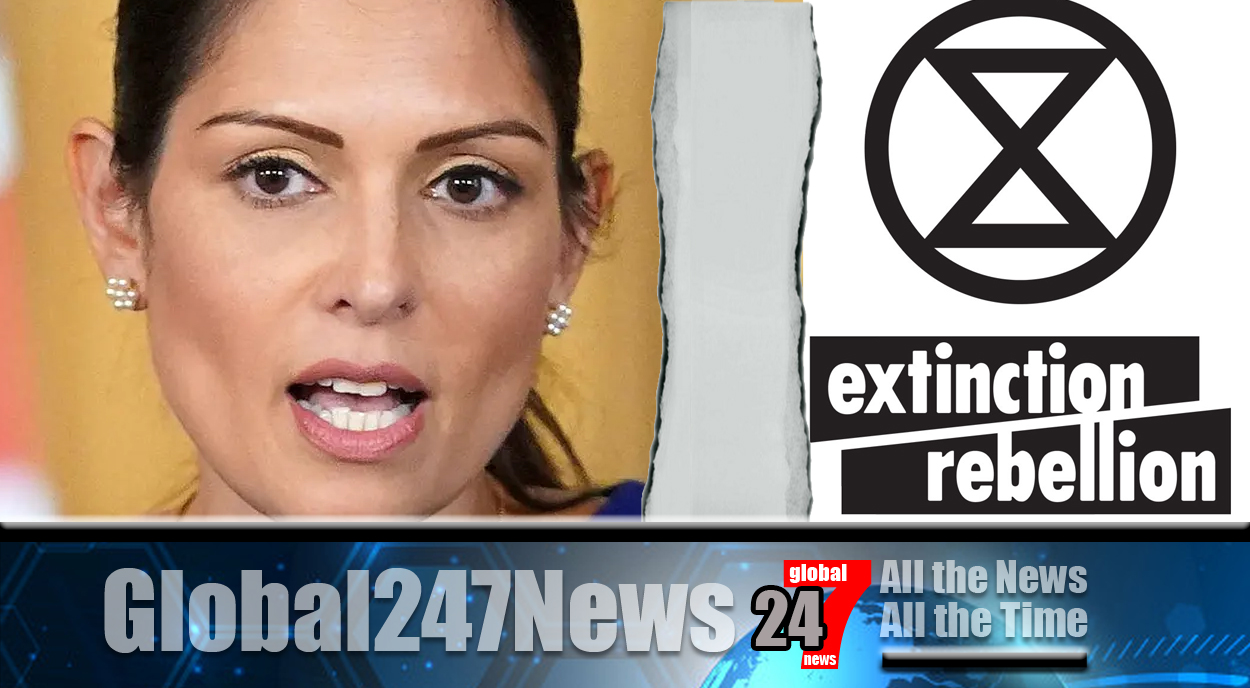 The group Extinction Rebellion (XR) has been accused of using “dangerous tactics”.

Extinction Rebellion ruffles Priti Patel’s feathers. Home Secretary Priti Patel has said she will not stand by and allow them to run amok in the name of environmentalism.

Demonstrating against the Government’s lack of action on climate change Saturday, they set up “road blocks of one”.

Their actions have angered the Home Secretary. In an interview with the Sun on Sunday she said. “I would not be delivering on my promise to the law-abiding majority. If I stood by as Extinction Rebellion deployed dangerous tactics in the name of environmentalism.”

Other protests were held on Saturday against the Police, Crime, Sentencing and Courts Bill.

The Bill had been drafted in part because of previous actions by Black Lives Matter and the XR movement.

The proposed legislation would give police in England and Wales more powers to impose conditions on non-violent protests. Including those deemed too noisy or a nuisance, with those convicted liable to fines or jail terms.

Ms Patel wrote in the Sunday Telegraph. “The powers will help the police to balance the rights of protesters to demonstrate peacefully against the rights of others to go about their daily business. And to dedicate their resources to keeping the public safe.

That is democracy in action.”

Their website states: “Extinction Rebellion is an international movement that uses non-violent civil disobedience in an attempt to halt mass extinction and minimise the risk of social collapse.”

Our world is in crisis. Life itself is under threat. Yet every crisis contains the possibility of transformation. Across the world, heralded by the young, people are waking up and coming together.

We hear history calling to us from the future. We catch glimpses of a new world of love, respect and regeneration, where we have restored the intricate web of all life. It’s a future that’s inside us all – located in the fierce love we carry for our children, in our urge to help a stranger in distress, in our wish to forgive, even when that seems too much to ask.

And so we rebel for this, calling in joy, creativity and beauty. We rise in the name of truth and withdraw our consent for ecocide, oppression and patriarchy. We rise up for a world where power is shared for regeneration, repair and reconciliation. We rise for love in its ultimate wisdom. Our vision stretches beyond our own lifespan, to a horizon dedicated to future generations and the restoration of our planet’s integrity.

Together, our rebellion is the gift this world needs. We are XR and you are us.

The above vision statement was written in 2019 by some of the humans organising as part of XR UK, specifically people in the Guardianship and Visioning Circle. Every person in XR can and will have their own visions. Some of them will be shared. There is no definitive vision statement for XR, nor do we desire one.

This vision statement is offered as just one attempt to bring us together with a shared vision. You’ll find another vision statement below in the expanded text of the first of XR’s Principles & Values, which was written around 2016-17 by other humans in RisingUp – before Extinction Rebellion was named and emerged into the world.