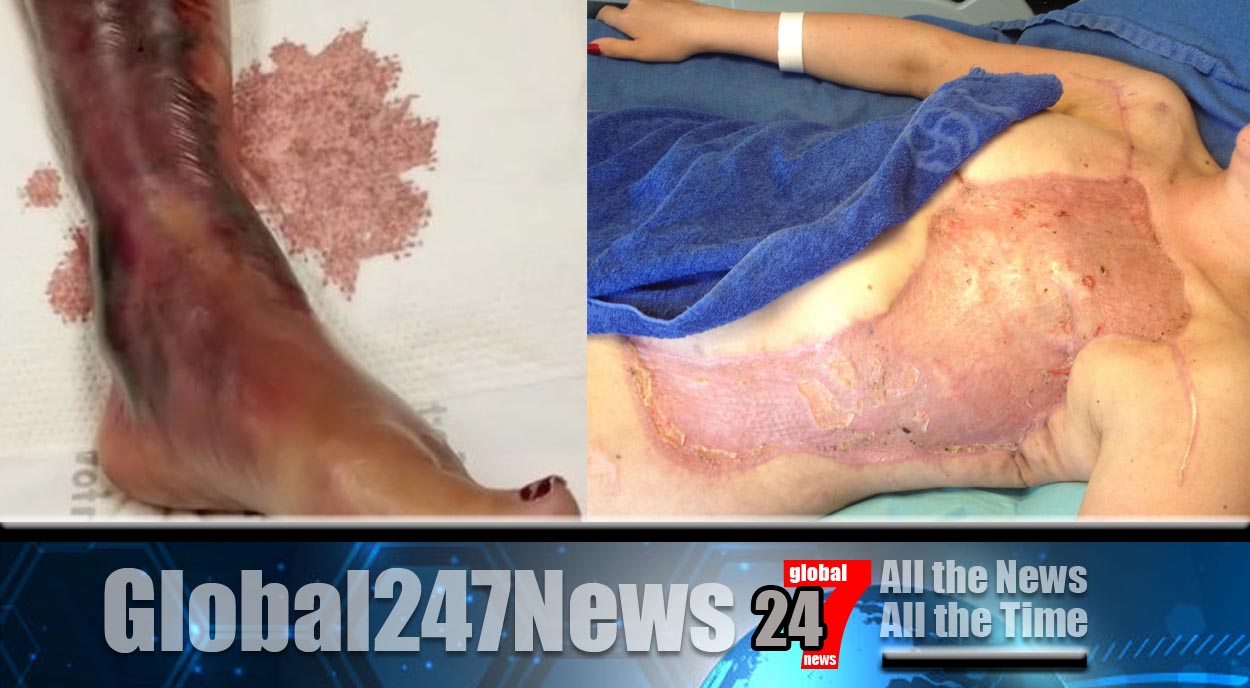 A woman who caught a flesh eating bug while swimming says she is “lucky to be alive”.

Fitness Fans Flesh Eating Bug doesn’t hold her back. She was so ill she had to be placed into a coma. Keen fitness fan Lou Trott, 51, from Westbury, Wiltshire had gone for a run while on holiday in Mallorca.

However she tripped and fell, cutting her knee. After going for a swim later that day she contracted the flesh-eating bug, necrotising fasciitisas, as it entered her body through the cut.

On her return from holiday she fell ill, contracting sepsis and multiple organ failure.

She was placed into an induced coma for a week. To enable the harmful bacteria to be removed from her leg Trott underwent multiple operations.

She then faced having to learn to walk again and will need further leg operations to tighten up the skin.

Trott said It’s been horrific – I couldn’t believe it was me there lying down, dying. The consultant said 70% of patients who had what I had die.

The skin graft felt like a swarm of bees or wasps landed on my leg and all stung me at the same time.”

She added “There’s a lot to live for – I didn’t want my children to be without a mum.” She explained that when she was waiting to be seen at the hospital she remembers hearing people crying, although her recollections were hazy as she was so poorly.

She said “Although the nurses and doctors were amazing, the experience in ICU was really, really traumatic.

I could hear nurses talking to my family about amputation. And I didn’t know what was real and what wasn’t. I was lying there and all I could hear was a lady crying next to me saying to her husband: ‘I wasn’t ready for you to go’.

At the time, I thought I was going to the ‘death section’ too – I was so frightened.” Mum-of-two Trott said that being able to run has hugely helped her recovery and she has even completed a half-marathon.

She added “I saw this challenge of a run for prostate cancer. My dad died four years ago from prostate cancer so this was close to my heart. I want to give something back to help other charities and hopefully they’ll never be in the same situation my dad was in.

She finished off by saying “My fitness saved me. That’s why I always think I’ve got to stay fit. I used to cry when I was running because I couldn’t believe I was doing it.”