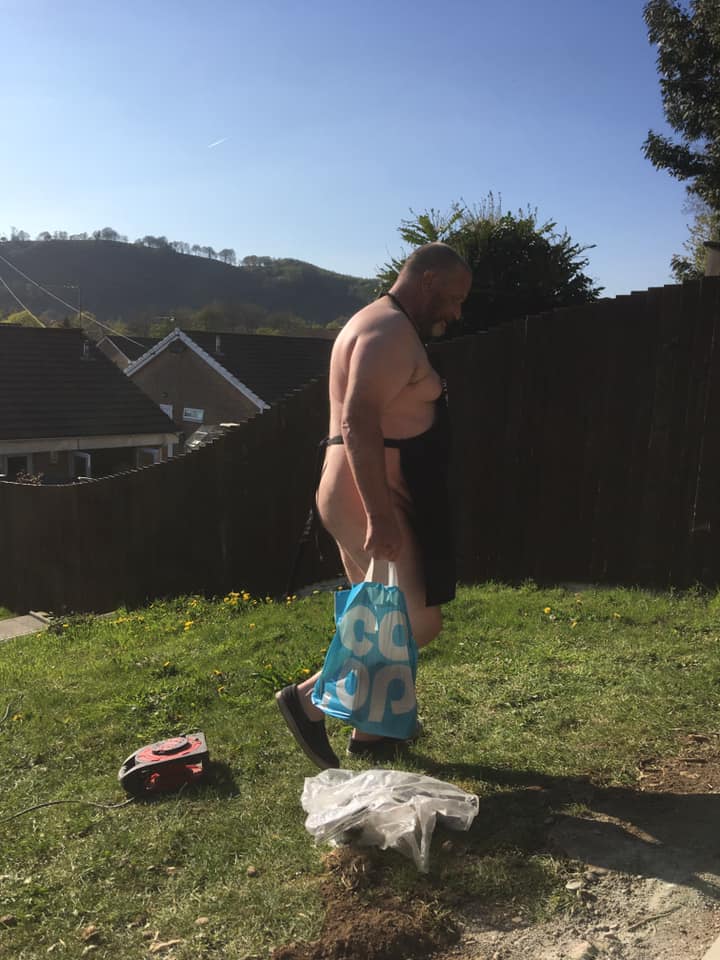 South Wales Police see an increase in complaints in regards to naked chefs at barbeques.

A craze sweeping through the hills of Wales, as the country, records its warmest and driest April is causing concern for the South Wales Police.

The latest craze in Wales is the chef at a BBQ goes naked apart from his cooking apron whilst flipping burgers.

Although it appears many nosey neighbours are not best pleased with peering over a fence and seeing the buttocks of someone attending the BBQ.

Yesterday In Taffs Well, 12 lads took it further when their naked chef went in his apron for supplies to the local Co-op.

Startled shoppers and residents of the South Wales village in Taffs Well could not believe their eyes when they saw BBQ chef Lyn Collins heading through the village just wearing his apron before strutting the aisles of the village supermarket.

South Wales Police were inundated with calls of complaint.

One complainer, Zena Richards, speaking to Global247news, told what she witnessed, she said

“I was driving to Taffs Well train station to pick up my elderly mother.

“As I passed Tabor Street, around the corner came this huge pair of buttocks and man boobs hanging out a chef’s apron.

” It was gross, it shouldn’t be allowed on the street, it’s indecent exposure, and I reported it to the police.”

According to Nigel Blake, store staff in the village store were also not impressed, who told how the assailant was asked to leave the store and reminded to attend fully clothed in future.

Nigel revealed, ” The store manager had to have a word with him, old ladies were complaining, especially when he reached to the top shelf for the sauces.

“It was a sight for sore eyes, I found it hilarious myself, I know Lyn he’s always one for a laugh but the older village residents didn’t see the funny side.

” I spoke to Lyn outside the store and he said that the village should get a sense of humour and that the single ladies should be honoured, he also claimed he had his hat on and that he reckoned that the most complaints were from jealous husbands” he laughed.

It wasn’t long according to Andrew Parsells before the police arriving at the BBQ itself, who stated the warning given:

“Whilst she could see we were having a good time and just enjoying the weather, she did give Lyn a warning, whilst she said it’s fine in a private garden, going on the street could be an illegal offence.

The latest craze in Wales has certainly caused a stir, with police often receiving calls from startled neighbours.

Although Kenny Symonds in nearby Cardiff, says there’s no issue and it gives you the feeling of freedom, although he condemned the actions of Collins.

He said: ” Going down the shop is a little too far and you have to have the body for it.

“Clearly that Jack (In reference to the fact Collins is a Swansea City supporter) hasn’t – he looked like a tramp.

“I’m not surprised at all the folk in Taffs Well complained, whilst my neighbours have no issue in coming round for a bit of sausage” he laughed.

Kenny added: ” We in Cardiff have class and do it properly, and will continue to do so, but yes the police should take action against the sort of behaviour from that Swansea supporting clown” before heading back to attend to his grill.