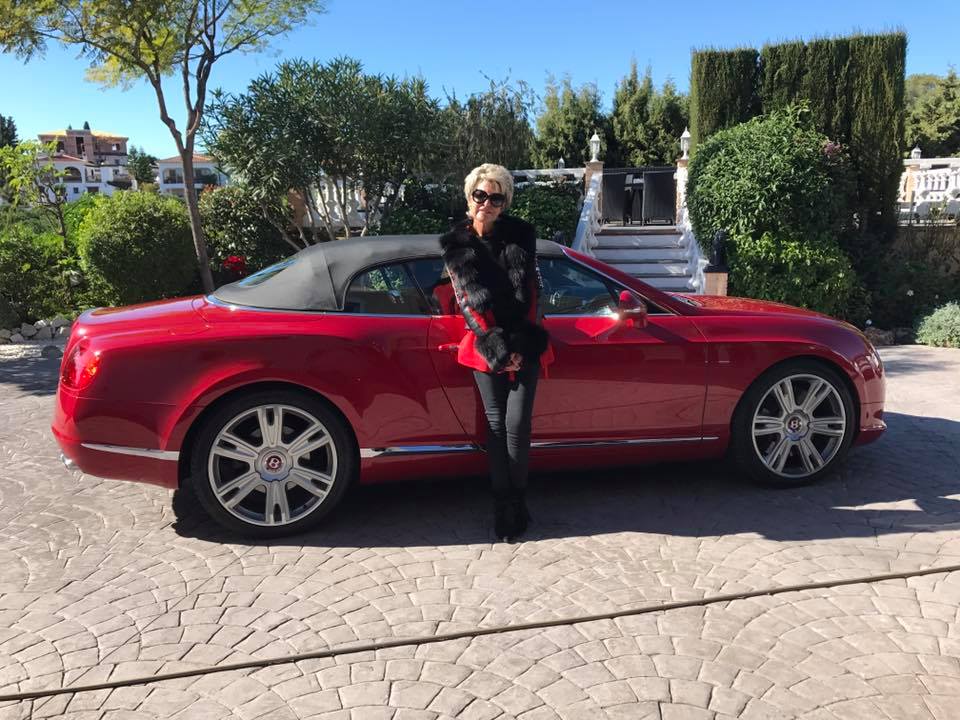 Michel Euesden, the CEO of a local free newspaper is often seen swanning around Spain in her designer bling as well as in her Bentley car.

Now she has written to Grant Schapp’s the UK’s Secretary Of Transport, requesting a cap for Brit’s in Spain regards PCR tests, on the basis, it’s too expensive to fly back and forth to see loved ones.

Euesden, who resides in her huge Villa in the hills of exotic Mijas, is well known to ex-pats in Spain due to her self publicity, to where she has even her own Facebook page ‘ The Euesdens’ citing herself as a public figure.

Michel Euesden along with her husband Steven Euesden also own a lavish property in France.

The Euesdens who moved to Spain over 20 years ago and allegedly have never returned to the UK according to an ex-member of staff, announced through their free newspaper’s website, that she has written the letter, stating

‘After such a long separation from loved ones during the pandemic, it is a priority for Briton’s here for tests to be affordable enough to see their families again’

As well as the letter, a petition has also been organised that can be found online, titled ‘Cap The Costs Of UK PCR Tests To Allow Brits To See Loved Ones Again’.

Studying the petition, as of today, only 34 persons out of the estimated 400,000 legal Brits residing in Spain have signed.

Also listed is Tara Rippin who works in the newspapers Costa Blanca office, as well as 14 signatories who did not wish to show their name.

Only 11 of those who have signed, publishing their name, reside in Spain, including the members of staff.

Although, whilst it appears on the basis that the Newspaper title, self claims its free newspaper to be read by half a million readers weekly, as well as self claiming millions read its website,  Brit’s in Spain aren’t rushing forward to sign up for some reason.

Whilst in the UK itself, British residents and citizens are in outrage at the thought of people living in another country should get priority, especially holidaymakers.

Having brought the letter and petition to the attention of Global247news, ex Premiership footballer, John Williams said.

“I’m flabbergasted why on earth should people who have decided to live abroad get priority from the UK government?

“There are millions of people in Britain desperate for a holiday, most not having had one for nearly two years, but Brit’s living in Spain, in the sunshine, by the sea, all year round want priority? – this woman is off her rocker whoever she is!”

Williams himself, who spends time in both Marbella holidaying and also coaching in La Manga added:

“Everyone just has to wait until its safe to travel again, if you can’t wait then you have to be prepared to pay the price, including those who can afford to live in style in Spain, they certainly should not priority over British people in the UK” he finished.

Another person to comment was Managing Director Adrian Vincent. Mr Vincent who owns a Company called ‘Trade Solutions Ltd’ was horrified at first, but then appeared to see the funny side as he explained:

“When I first read it, I was horrified, here’s my family, work themselves to the bone for our family business 7 days a week and we haven’t had a holiday in 3 years.

“Normally we travel to Turkey for a well-deserved break but accept at present we can’t, and yes we have friends and family who live out there who we haven’t seen.

” It’s the British taxpayer if anyone who should get priority, not immigrants that live in Spain paying into the Spanish system – they should be writing to their own government in Madrid not ours in Downing Street, who on earth do they think they are?

“They chose to leave Britain, it was their choice! – they can’t expect to start crying over British pricing.

“Normally they are giving it the ‘big one’ how they are better off in Spain as everything is so cheap!

“Now they want priority over British people who pay British taxes and actually support our nation, not a foreign one?” he questioned.”

Mr Vincent also saw the funny side when he had calmed down, saying:

“I have a picture of Grant Schapp’s in my head, reading the petition request, bursting out laughing.

“Maybe he can discuss it on GMB? – they can watch it in Spain on their illegal TV streams” he laughed.

“Hey, I have nothing against Brits going to live in Spain unless they are on the run down the Costa del Crime.

“I have pals who live there or have lived there, but that’s their choice, they can’t expect favouritism though from the British government, when they don’t even live here – if anyone should get the priority it should be us, not those living under the rule of the Spanish government” he finished.

Although, over in Spain itself, despite the letter of request and petition being in their favour, Brit’s don’t seem too impressed by the Euesden letter and petition.

One resident in Fuengirola described it as embarrassing and gave her reasons why as she said:

“Let’s be honest here, everybody would like cheaper pricing, nobody turns it down.

“We can’t though expect to be given priority when we live in Spain full time.

“This petition I find embarrassing as a British person here, running a business.

“If there is to be a petition then it should be for the lowering of PCR costs for British holidaymakers, we would benefit far more from that, that’s what this country needs right now.

Another resident in the same town, Warren, was quick to point out how he thought it was very hypocritical, especially as it was being championed by the Euedens themselves,

He pointed out: ” It was only in February that newspaper was promoting an article with the owner and her son.

“The article revealed that the son questioned Brits living in Spain and quoted him as asking,

Why? “Because I want a better life for my children, my parents and me,” says Benjamin George.

“People who are looking to the past won’t go anywhere, and if you don’t support the forces, the king, the flag etc, what are you doing here?”

The article then contains another comment from the son, stating he gets heated up about the lack of patriotism towards Spain, pointing out: “What they need to do is get their stuff and get out of the country if they don’t like it!”

Warren feels that it’s very hypocritical saying ” One minute they are saying if you aren’t patriotic to get out of Spain and the next they are writing to the British government asking for priority, surely they should be writing to Pedro Sanchez to foot the bill or the King as they are in such favour of him – that’s clearly who they support!”

He then came up with a suggestion saying: ” If she feels so strongly about 80-year-old ladies not being able to get back and forth cheaply to the UK to see their grandchildren, why doesn’t she foot the bill herself and pay for them if she’s so concerned? It shouldn’t be down to the British taxpayer to rescue ex-pats”

An ex-employee at the newspaper gave his thoughts and his insight into the petition and campaign, he said:

” The only person Michel Euesden cares about is Michel Euesden and maybe her family members, she’s all about her, she even addresses herself as ME on occasions.

“This once again is all self-publicity for her and her newspaper – that’s the bottom line, she’s not a public figure and she’s most defiantly not a well thought about person by ex-pats living in Spain.

“I would say amongst the normal people living here, she’s one of the most despised in my opinion, that’s why we all nickname her ‘Madge’ after the character on the Benidorm TV show.

” She doesn’t represent us Brit’s living in Spain, despite the fact she thinks she does, I could tell you story after story about her but I won’t at this stage, as it could sound like sour grapes, but take the statistics from the so-called petition and they will give you the real scale of the picture.

“I can tell you now, the majority of us don’t want her writing to the British government on our behalf and we don’t expect priority either, we have set up home in Spain and so be it, there is no cause to be championed especially by her!” he finished.

The argument is certain to rumble on, whilst Grant Schapp’s reads the pleading letter for priority and studies the petition, of which to date has 8 publicly signed persons residing in Spain who are non-staff.

Global’s opinion: – If there are to be any caps or priority it should be to the British holidaymaker firstly.

Although we don’t feel there should be a priority and that lower prices for PCR tests should be for everyone.