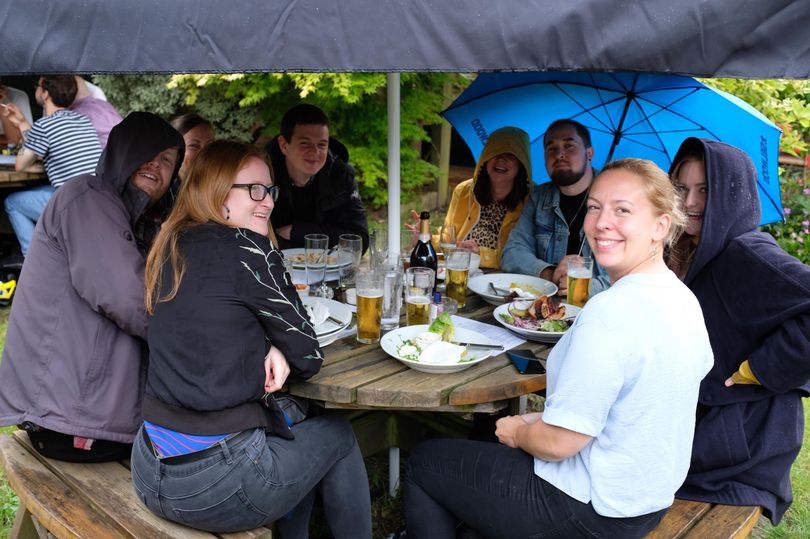 A group of Welsh drinkers arrived in Bristol this morning from the Welsh Valleys singing:

“Our leader Dickford won’t let us have a beer

” So it’s off to Bristol here we come”

The group of Welshman caught the train from Cardiff over the border to Bristol singing as they travelled.

Coming out of Temple Meads station in Bristol, crowds gathered and clapped as the group headed into the City centre wearing Welsh scarves and football tops.

Whilst today in England you can now sit outside and have a good old real ale, the poor Welsh under the rules of their leader Mark Drakeford remains dry.

The mob had made an early start leaving Cardiff at 6 AM determined to have a good time.

As the mob headed to the Spotted Cow in Bristol for their first chance of a pint in a pub for a long time, singing as they went – a large cheer boomed out from the lads who had a ‘road map’ of pubs mapped out.

Meeting their counterparts in the Welsh group’s plans, a group of Bristol drinkers sang back

‘Come and join us

Come and join us

Come and join us over here’

Touring the City and visiting every available pub it wasn’t long before some couldn’t keep up with the pace.

Slurring to a Global247news reporter, Chris Jacob, a member of the party tried to say:

“It’s crazy we can’t get a pint in Wales but our leader is a dick.

We have booked a hog roast for this afternoon, will sup a few more ales before heading back on the train”

“They have been good as gold, they booked their roast a week ago, explaining they can’t get a beer in Wales”

As the party went in search for another pint, having lost their tour map, the last heard from them was,

“We love you Boris we do

We love you Boris we do

Oh Boris we love you”

let’s hope they get home safely and on the right train!