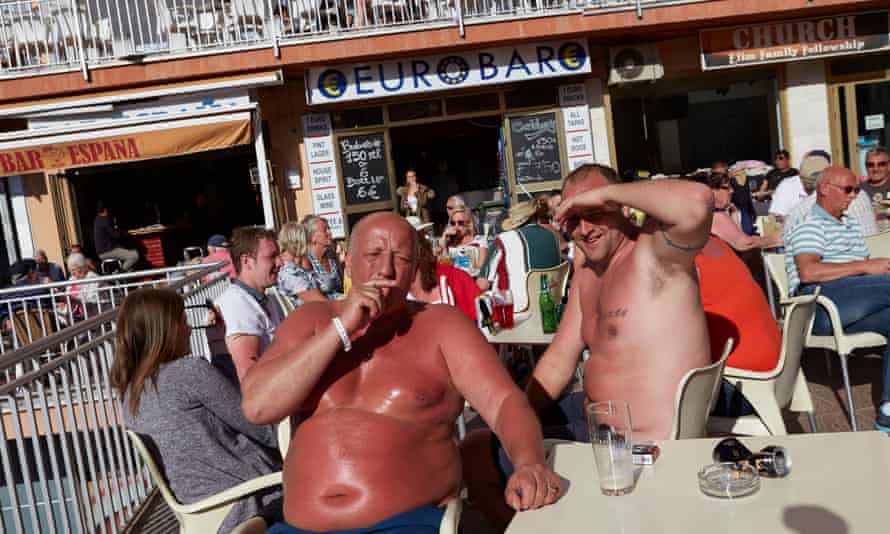 Yesterday, Global247news published an article in relation to Brits and advising their fellow countrymen, not to live in Spain as they felt it was a rip-off.

The article was based upon a simple question asked in one of if not the most popular ex-pat Facebook groups on the Costa Blanca, Orihuela costa buying and selling And Information run by the popular businessman Colin Richards.

As the article explained, some Brits who were either living in Spain or had lived in Spain advised not to move to the country as it was a rip-off.

As the article was spread across both the Costa del Sol & Costa Blanca, whilst some British immigrants agreed, there was a huge backlash from those against the view.

Over 1,000 British immigrants in Spain hit the Global247news website per minute to express their own thoughts.

The Global247 news desk receiving in excess of 5000 viewpoints with many thanking us for the article.

Hayley Downing a real estate operator who sells properties all over the world wrote:

“Thank you for a great article. Where else could anybody get that kind of info in such a perfect approach to writing? I have a presentation with clients next week, and I’m on the search for such information, although it would be good to hear about others views who enjoy living in Spain”

For sure there was plenty of that coming into the newsdesk as well as thousands commenting on social media.

Simon Papher was quick to hit into Brits who he feels come for the wrong reason and can’t wait to see them returning back to the UK, Simon said:

“Many Brits leave the UK as blue-collar workers and arrive in Spain as Bar owners, or even worse as “expert real estate agents”. To make things more interesting, they don´t speak Spanish nor do they plan to learn. So, what could you expect? Traffic is not going in the wrong direction, YOU ARE!”

Out of the thousands of viewpoints and comments from British immigrants living in Spain, the most common one was not learning the language issue,  pointed out clearly by Debbie Summers, who fired out:

“The one’s who don’t like it and call it a rip off are at fault themselves.

“They come here, don’t learn the language and just treat it like Britain in the sun.

“They don’t integrate, they don’t learn the language and they do no research whatsoever on the Spanish way of life or the laws and regulations before coming.

“Sitting in a British bar in a string vest, supping ale with an English fry up is for the holidaymaker – not the Spanish way of life” 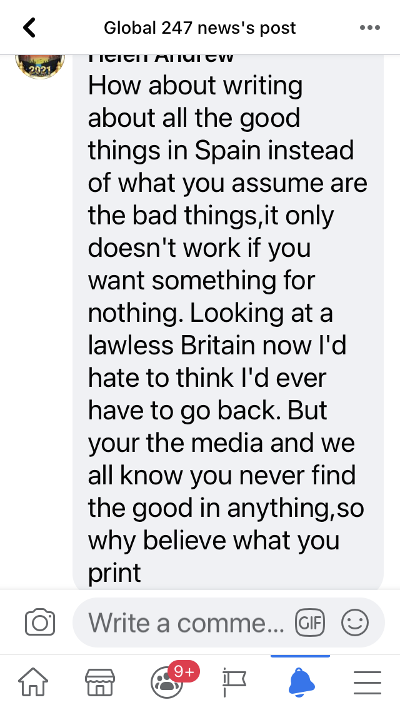 Heather Andrews, posed a question whilst blaming the media.

Andrews claiming Britain was lawless and a lack of media reporting on the good things of Spain or the good in anything.

Andrews, clearly not a regular reader of Global247news missed the point that, as clearly as stated on the front page of the website states ‘The voice of the people’ to which the voice was exactly that from those who had expressed their opinions on social media.

After adding up all the comments, in percentage terms, 54% stated Spain was a good place to live whatever the circumstances, 29% said it was good if you are retiring and have an income from the UK, with 17% not in favour of Spain long term.

Speaking to the man who shared the post across Spain yesterday, one of our advertisers, Steve Day, we asked him his thoughts as a person who has lived across the world, one of them being Spain.

Day who made his ‘retirement fund’ after many years importing furniture and from a sports business, told Global247news his views and experiences from his Welsh home.

” I did five years in Spain after 3 years in Gibraltar – I can see the two sides to the debate.

” I decided to go to Spain to retire and try it out – I liked it personally.

“Although after 5 years I didn’t think it would be my forever home, I struggled with the language for sure and that did make a big difference.

” You see different types of Brits in Spain, those who have learnt the language and totally integrated into the ways and laws of the country, they have basically for all intents and purposes become Spanish, my best buddy and his family there a perfect example, their children went to a Spanish school, the parents learnt Spanish and mixed with the Spanish locals, they have been there for 17 years now, that’s how you really go to live in Spain.

” Personally I can’t see how people can call it a rip-off – surely you look up the regulations before if and when you go, if you don’t like those regulations, it’s quite simple -don’t select Spain.

” I’ve personally lived overseas in China, Singapore, the USA as well as Portugal, Spain and Gib, you have to respect and research the laws of that land,” he said.

Day then went into the downsides of living in Spain, he said:

“I was probably what you could regard your typical Brit abroad, although I went there to retire in essence although in the back of my mind was a pal of mine, Alun Williams who had tried it, not to do it.

” Alun had his own roofing business in Wales, famous in Cardiff for building the roof on the old Grange End at Cardiff City Football Club free of charge, he went down the retirement angle in Spain but returned after 16 months, he advised me against it but I went with it to give it ago.

” I was probably your typical Brit abroad, love my football, love a beer and soon got bored, you can only do so much sunbathing” he laughed, before going on,

” My biggest mistake was taking on some work to keep me out the bars and stop getting bored. It was then I got to see the other side of Brits in Spain, talk about ‘clicky and bitchy’ to say the least and seeing the real lives and actions of Brits who had lived there for years, horrible people! but I guess that was just a bad bunch possibly?

“Although in the Brit communities there, due to I believe them being bored, they can bitch like hell, it reminded me of the Gibraltans in the bingo hall when the Spanish come to play” he giggled.

“The further south you go, the more pretentious the British seem to get, I chose Torreblanca close to Fuengirola, it was ‘normal’ there but go a bit further and you can meet some right pretentious w…..s and they are the worst, – we used to call them the weekend millionaires, rich on Friday, skint on Monday again after a weekend swanning around.

“During my times in Spain, I met some great people though and I did find the Brits based on the Costa Blanca more ‘normal’ but all in all it was a good five-year experience but can be boring, for someone like me, it didn’t have a lot apart from Sun, cheap beer, and beaches, I guess it was like a 5 year holiday really”

In regards to his own advice on moving to Spain, he covered:

“If you are retiring, personally I would look at Portugal, it’s probably where I will go back to when the time is right.

“Although if you wish to go to Spain, listen to the advice of people who have commented since the article was published.

” Learn the language, preferably before you go and go with the purpose of integrating with Spanish people themselves, not fellow Brits, go to live the Spanish way of life and follow their culture and before you go ensure you are happy with all the laws and regulations of the Country.

” If you are going and needing work – don’t! unless you want to work for all the godsend hours of the day for a pittance.

” You won’t see much of the benefits of Spain working in a call centre 12 hours a day or selling adverts to British ex-pat businesses – half the time they don’t even get paid, that’s where the rip-offs are!

“The Brits actually rip off the Brits, it’s not the Spanish or Spain, Spain is the home for a lot of British blaggers!

Just take a look at the jobs advertised for Brits in Spain, It will give you the insight for sure, there’s no decent work there for the majority – retirement is the only way for the majority really”

Day, after reading many of the comments then turned to those who said negative comments regards Britain, saying:

” I can’t understand those who put down Britain, it’s like they have gone to Spain with a chip on their shoulder, and If they are residing in Spain why they are so concerned about Britain anyway?

“It’s not lawless, it’s not a shit hole as some commented, Britain is a great place to live especially if you select the right spots, personally I think its got a lot more going for it than Spain apart from the weather, the countryside, and the friendly culture, you won’t hear ‘good morning’ 30 times a day when you walk your dog in Spain that’s for sure, especially if you haven’t integrated into becoming basically Spanish and most Brits don’t do that!

“The people who make these comments should remember it’s where their funding comes from, they need to take the chip off their shoulder”