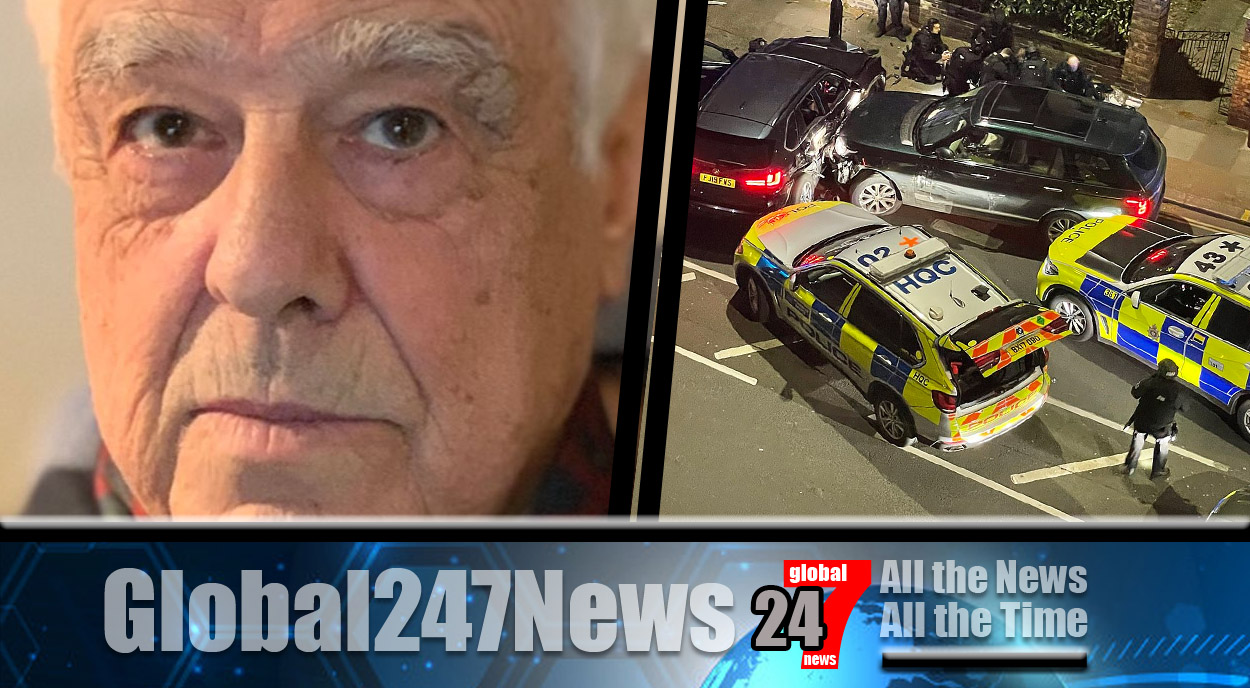 Armed officers stopped the car of a suspect wanted in connection with the stabbing.

Multi Millionaire Murderer Apprehended. The 34-year-old suspect was arrested in west London. Sir Richard Sutton was killed at his home in Dorset. The car, believed to be connected to the incident, was tracked across six counties by police forces. Eyewitness Maureen Kane, whose home overlooks where the vehicle was “forcibly stopped”, said she heard a loud crash. And then saw officers with guns pulling a man out of the car.

She said “About 30 or 40 other police cars arrived and I saw lots of people shouting. The man who was in the car was injured. With around 20 policemen around him, shouting ‘What’s your name?’. And then the ambulance came. He looked pretty badly injured. He was taken away in an ambulance after being treated on the roadside for about 30 minutes.”

She added that police had to crash the car to make it stop. Dorset police said the suspect was treated in hospital and his injuries are not life-threatening. Sir Richard and his wife had been attacked in Higher Langham and rushed to hospital. Sir Richard, 83, was pronounced dead a short time later. While his wife, in her 60’s was airlifted to Bristol’s Southmead Hospital in a critical condition.

Sir Richard’s company released a statement saying. “Sir Richard was a caring, generous and warm family man. Who genuinely regarded those who worked for him as part of his extended family. Sir Richard was passionately devoted to both his company and its people. Setting the highest standards for quality in the hotel, farming and property interests within the group.

His loss will be felt by everyone within the company. Those who worked with him, and his family who have lost an incredible individual.

Our thoughts are with the Sutton family at this tragic time.” His fortune is reported to be worth £301 million which makes him the 435th wealthiest person in the UK.

The Detective Inspector leading the investigation, Simon Huxter, said “Our thoughts are with the family of the man who sadly died and the injured woman at this extremely difficult time and they are being supported by specially trained officers. We will be carrying out a full investigation to establish exactly what happened at the address in Higher Langham, and I would appeal to anyone who saw or heard anything suspicious in the area on the evening of 7 April to please contact us.”