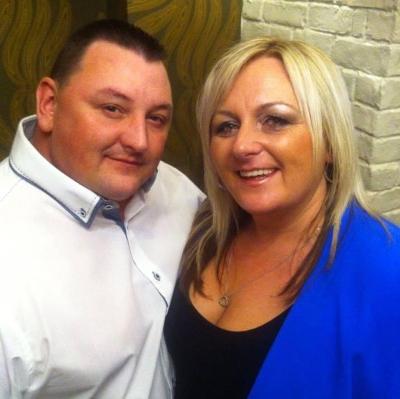 Mark Craven has allegedly taken deposits from customers wishing to hire his motorhome and now done a runner.

Julia Liptrot lost £250 deposit, as she was horrified when receiving an email from the Cravens. 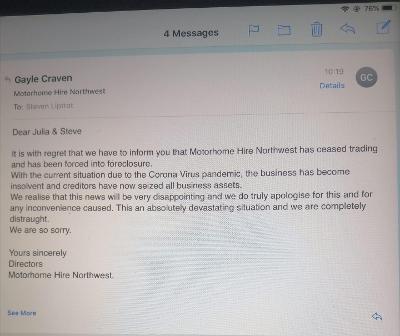 Concerned Julia, took to social media to say after receiving the email:

“Well, we have been well and truly done over!

” We paid £250 deposit for a motorhome booked for 10 days in June, booked and paid for campsites and the ferry to the Isle of Wight before receiving this email this morning.

“I tried ringing Gayle but both landline and mobile telephone numbers have been disconnected.

Julia who lives local to the Craven’s decided to investigate further and go to their property.

On arrival, she found the property completely empty with neighbours advising she was the third ‘customer’ that day seeking the owners and their money.

Bookings for the motorhome in question appear to have been fully booked right through from May to September according to Mrs Liptrot.

At first, some members of the public appeared to have some sympathy for Mr & Mrs Craven, citing it as just a shame that businesses are going bust due to the pandemic.

Although that now doesn’t appear to be the case, as Global247news investigated.

Motorhome Northwest in the email had claimed to Mrs Liptrot had been forced into foreclosure and creditors had ceased all assets.

On investigation, this does not seem to the case.

Whilst Mark Craven did hold a limited company at companies house in Cardiff, it had already been dissolved many months ago as advertised in the Gazette and struck off.

Accounts for the previous trading also appeared non-existent with little business being put through the said company.

Further investigations show that the motorhome in question is still legally registered to Mark Craven.

It’s now alleged that both Mark and Gayle Craven have taken many deposits totalling thousands of pounds before scarpering with the cash whilst falsely claiming this has been forced upon their company.

Now the hunt is on for the alleged fraudsters.

This morning Julia Liptrot updated she has now gone to trading standards with her complaint whilst fellow motorhomers are now hunting down Mark Craven as well as his wife, as well as the Global247news investigation team.

Early indications appear they may have fled the country with thousands of pounds of customers money, with the Craven family having relatives in Spain, although its urged that it’s highly likely they are in their motorhome trying to evade the law.

If you know of Mark or Gayle Craven and their whereabouts please get in touch!

To read more follow www.global247news.com  the real voice of the ‘real’ people.

One thought on “Hunt on for motorhome rental scammer Mark Craven”