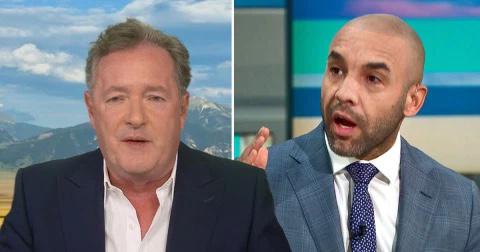 The 56-year-old presenter spoke to US conservative news personality Tucker Carlson about his exit from the ITV daytime show, which took place in the wake of Prince Harry and Meghan Markle’s tell-all Oprah Winfrey chat.

Before his departure was announced, Piers stormed out of the studio during a tense clash with weatherman Alex over his comments about the Duchess of Sussex.

Piers described his former colleague Alex as ‘the stand-in weather guy who does the weather occasionally’, as he opened up to Tucker about their on-air row.

‘He’s not a journalist, but he’s somebody I’ve helped with his career a number of times when he’s asked me to,’ he continued.

‘He sent me a private message in which he expressed some concern about what he felt I wasn’t really understanding about where Meghan Markle was coming from as a biracial woman.

‘He is himself a biracial man so he wanted to explain so I said come on air, let’s have the conversation. But the moment he came on air, he came with a pretty premeditated attack on me on a pretty personal level and frankly I just wasn’t going to have it.’

Piers added: ‘I walked off … I was quite angry in the moment, he claimed that I have a personal vendetta against Meghan Markle, which I don’t.’

Many West Country residents now want him sacked from his position delivering the local weather.

Tina Lock in Weymouth claims his ego has got too big as she told Global247news: “He has to go totally from our local screens, his ego has got the better of him and all he is doing is courting publicity.

“It’s backfired though this time, everyone I speak to says the same, they want him off the weather”

Darren Smelding, in Dorchester, had a different viewpoint: ” I was 50/50 about him until he played the race card announcing to the world he was quitting social media.

” If he didn’t seek the publicity, he would have just quit quietly, it’s all about him I’m afraid”

Whilst Robert Scott in Yeovil Somerset hit out “He’s a melodramatic queen not fit for purpose to read our weather, he should be suspended until all this dies down and take the time to learn how to be a weatherman again, that’s if he can’t be sacked!”