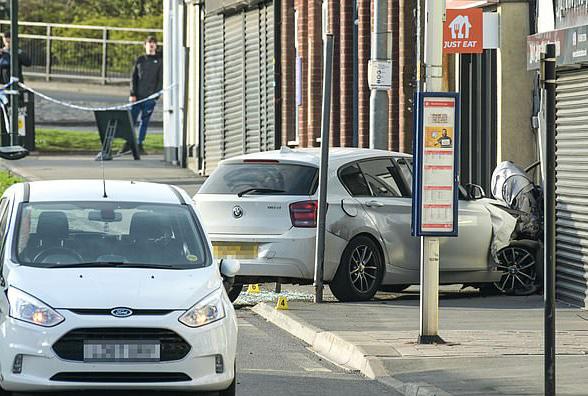 Police have arrested a 34-year-old man after a two-week-old baby boy was killed when a BMW careered off the road and slammed a mother and her pram into a wall on a busy high street.

The driver fled the crash site in Brownhills, Walsall, after the incident at around 4 pm on Easter Sunday but a man was arrested around four miles away in Bloxwich shortly afterwards. He is being held on suspicion of causing death by dangerous driving.

The baby died in front of his parents, who were left ‘hysterical’. Police believe the tragedy happened after the BMW1 Series crashed into a Ford B-Max before ploughing onto the pavement and pinning the mother and baby against a wall.

The driver of the white BMW has not paid road tax since October 22, according to DVLA records seen by MailOnline. It has an up to date MOT.

The baby was taken to hospital by paramedics but could not be saved.