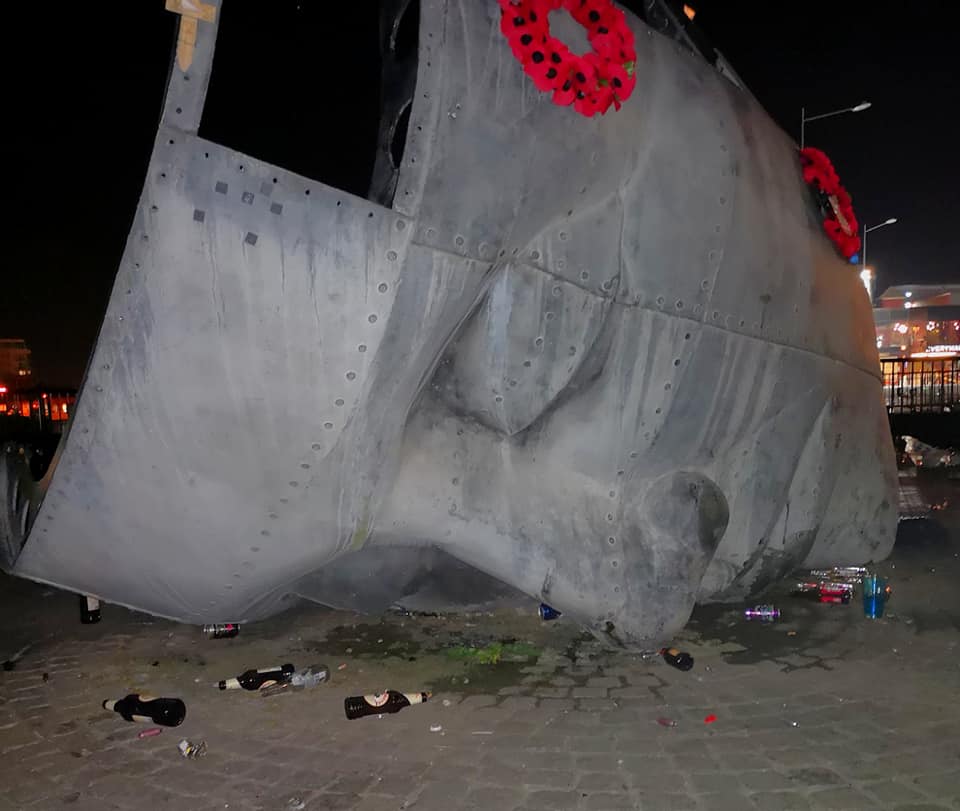 In Cardiff Bay stands a war memorial for the merchant seafarers who lost their lives in the war.

Although, its now had to be covered up to protect it, after Welsh yobs disgraced the memory of those fallen.

Urinated on by the youth of today, making law-abiding citizens so angry and disappointed after the disgraceful scenes over the Easter weekend.

Cardiff Bay, once the home of many a seafarer all over Wales, previously known as Cardiff Docks as coal was transported down from the mines, is supposed to represent modern society.

Although the representation of the younger generation clearly has no morals or respect for those who died during the war -preferring to use it as a toilet.

Now residents in Cardiff are calling on Welsh members of parliament to protect the memorial that means so much to so many.

Bradley Jones, who took the photos after the disgraceful scenes and went to the Bay to cover and protect the iconic memorial has now rallied for its protection to members from all parties citing “We want action to protect the war memorial”

I was so engulfed with disappointment and rage last night at seeing the Merchant Navy War Memorial and grave on land for those lost at sea disrespected in the way it was, I had to go and check the damage thankfully nothing permanent but this is what I found.
I couldn’t stand to leave it the way overnight it was so gloved up I did what I could.
the memory of those fallen urinated on by the youth of today so angry and disappointed today.
Stephen Doughty MP
Cardiff Council / Cyngor Caerdydd
Propel Wales – Propel Cymru
Neil McEvoy
We need action to protect this war memorial.

The shocking scenes have brought outrage to many including Joanne Abraham, the daughter in law of the late Annis Abraham Snr – one of Cardiff Dock’s favourite sons.

” Where has the respect gone in society? – The memorial is for people to pay their respect to all the seafarers in Wales who died at sea for the sake of the next generation,

” How do the next generation they gave their lives up for pay their respect?

” By peeing on them, It’s absolutely disgraceful and they should be hanging their heads in shame!” she raged.

At present no members of the Welsh Parliament have come forward to offer their support for the protection of the memorial, although local businessman Gareth Williams from Cyncoed wants it fenced off by the council immediately,

He told Global247news this morning from his Cardiff home, “I’m absolutely appalled by the lack of respect shown by the youth of today here in Wales.

“Two things we need to do, firstly protect the memorial from these disgusting pieces of human society, they are scum and secondly bring back National Service to teach them respect” he finished.

Cardiff Bay now faces its fourth day of youth gatherings although after a lack of presence from the South Wales Police surveillance has been stepped up.