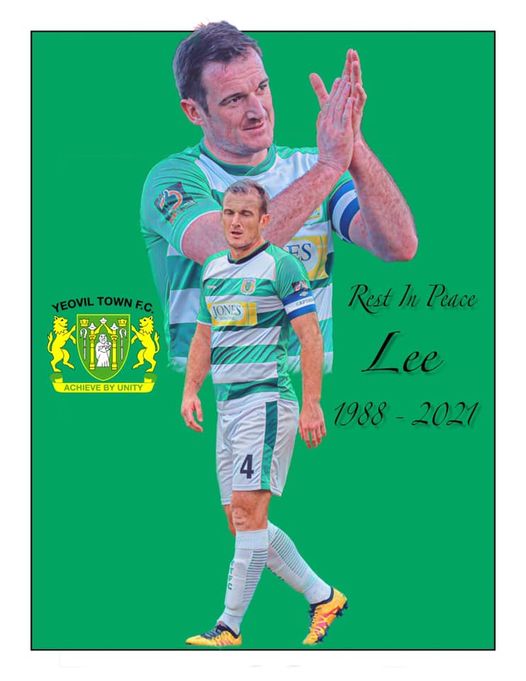 As the town of Yeovil recovers from the shock news, yesterday of the sudden death of its football teams Captain Lee Collins, the fans and people of the community of the town is pulling together.

Collins aged just 32 was found dead at this home in West Coker, just outside the town, shocking the football world.

As flowers were laid at the famous ground of the FA Cup giant-killers, Huish park, shocked fans reeling from the sad news started to pull together.

Yeovil Town, one of the most famous clubs in the footballing world outside of the top elite, due to its many exploits in the FA Cup over the years and its rise from non-league football to the Championship in recent history- Before falling back to the non-leagues, has always had the most loyal of fans through thick and thin.

Those fans demonstrated that loyalty yesterday after reeling from the sad shocking news that quickly spread across the globe.

Fan Colin Clarson, based on the other side of the world in Australia, had recently won in a fundraiser the Captain’s shirt from a playoff match but decided that now the shirt shouldn’t belong to a fan.

Instead, he and fundraiser Yeovil fan, Kieran Conway, decided the shirt should be framed and be given to the three daughters of  Captain Collins.

“What a great Gesture from Colin Clarson who won Lee Collins Matchworn playoff shirt from the fundraising I’ve been doing.

“He currently lives in Australia and I was gunna send this shirt to him.

“However me and him have been speaking and we have agreed this shirt doesn’t belong to us fans, this should belong with Lee Collins Daughters. So they can treasure and keep as memories .

“Rodger McCabe is trying to source us a frame to put this in but if anyone has a frame going spare which this could go in please get in contact.

“What a great act of kindness from a fan on the other side of the world -Thankyou Colin.”

After a plea to the clubs’ loyal fan base from supporter McCabe, not only did donations start flooding in but a benefactor for the frame itself as McCabe announced on social media:

“Well… What an amazing football family.

“Kieran Conway and myself asked for donations to get the football shirt framed.

“Donations have now rocketed to over £600!

“With the offer of getting the shirt framed for free, we are now left with this huge amount of money.

“I am in contact with the club for suggestions on how to use it.

The fans and people of Yeovil though are now in deep thought for the players family and are preparing to set up a donation page to support the family through these sad and tough times.

One fan, Craig White, expressed “This I why I love Yeovil. Amazing, from an amazing set of fans. How can I donate?”  whilst Wolves supporters, where Lee Cross started his footballing career are eager to add their donations.

Paul Stringer, from Willenhall, told Global247news: ” Those Yeovil fans are amazing and I know there will be lots of donations coming from this area, the smaller clubs have the most loyal of fans and that’s been fully demonstrated over the last 24 hours by the Yeovil Town supporters” said Wolves fan Stringer.

He continued, ” I read a poem left by a young fan – it left me in tears reading it, what loyalty and love”

The clubs’ motto ‘Achieve By Unity’ is clearly in full drive in the small Somerset town despite their sad loss at this time.