West Country Weatherman Beresford under fire as complaints roll in 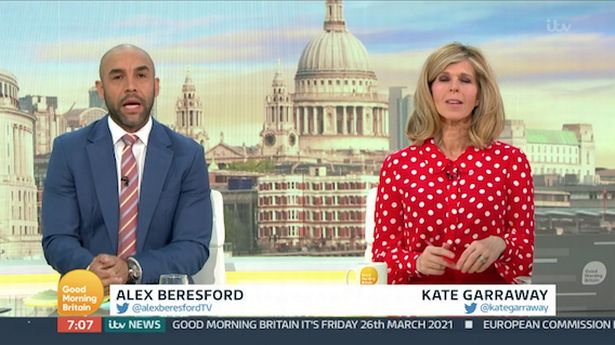 Alex, who is also the weatherman on GMB alongside meteorologist Laura Tobin, famously clashed with Piers, 55, at the start of the month setting off a series of events that ended in Piers quitting the show.

As the show went out with Alex in the top seat on March 26, fans took to Twitter to hit out.

One fan penned: “Is it just me that feels particularly annoyed that Alex Beresford is now sitting in Piers Morgan’s seat? Method in the madness? Not amused!”

Another added: “Alex Beresford sitting in Piers Morgan’s seat on GMB is giving me life.”

Over the weekend, Piers hit out at Alex in his Mail on Sunday column, saying that Alex “whacked him” to “make a name” for himself and it appears many in the West Country feel Beresford ‘stitched up’ Piers Morgan.

The Weatherman certainly hasn’t impressed many of those in the West Country,

Tina Lock from Yeovil in Somerset expressed her feelings as she said: ” You can see Beresford is a sly one, I’ve never liked him on West Country weather, he comes across all smarmy and you could see him trying to wriggle his way to fame on GMB -it wasn’t the first time he’s hit the headlines on there”

Whilst Damian Rodwell from the town said: ” He manipulated the situation well getting Morgan to storm off with his ‘leftie’ views, look at him now in the hot seat trying to become a presenter from being a weatherman, I can’t stand him, I turn off HTV West Country weather if he comes on the screen, I want to punch the telly!”

Thomas Wass from the village of Stoke Sub Hamdon volleyed: ” He will soon get the sack as the ratings crash with him in the chair, and sooner the better, he’s the worst of the weather crew and no way is he a presenter” said the furniture salesman.

Ofcom as of this morning has received 33 complaints about Beresford taking the presenters chair, although he does have some supporters in the West Country as Joan Hillier from Weymouth said” He’s a lovely man, a breath of fresh air after that ranting moron Piers Morgan, I think they should give him the chair more often, he’s wasted on the weather”