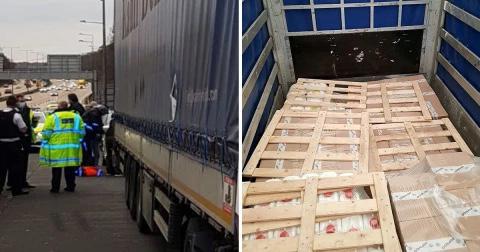 A lorry driver has been charged with trying to smuggle 17 migrants out of the UK.

Hakan Zengin, 36, from Turkey, was arrested after the stowaways were discovered in the back of his truck bound for mainland Europe, police said.

Earlier, the driver was pulled by UK cops and stopped at the M25’s junction with the A3 in Surrey on March 21.

Afterwards, Police added the migrants were concealed in the lorry’s trailer and were sitting on pallets that had been laid across the load to make their journey more comfortable.

They were all arrested on suspicion of immigration offenses and are being dealt with by the immigration authorities.

Meanwhile, Zengin appeared before Wimbledon Magistrates on Tuesday where he was remanded in custody until his next scheduled appearance at Kingston Crown Court in April.

A spokesperson for the National Crime Agency (NCA) said: ‘Smuggling migrants out of the UK is more common than you’d think, with people smuggling working both ways.’