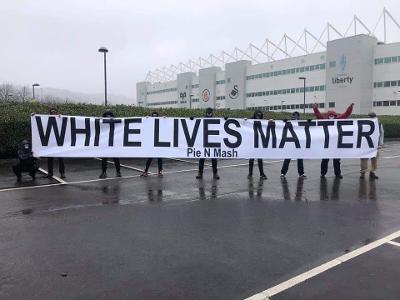 A group of hardcore campaigners released a statement to the media today whilst also setting out their plans when the lockdown finishes.

The statement provided to Global247news by one of the chief organisers reads:

“Black lives matter ( BLM) is the stupidest of names but the system is screwing everyone the same.
The system works on the divide.
They have brainwashed everyone to think White Lives Matter is racist and Black Lives Matter is a political social movement.
All lives matter is also considered racist as it does not fit the agenda of the divide,
The system won’t be happy till no lives matter, for that reason we are coming to protest in your area soon”
The agitated chief leader after providing the statement revealed as soon as lockdown ends, the organisation will tour Wales and then the West, listing out the areas they intend to target.
The list being as follows,
Bridgend, Caerphilly, Aberdare, St Brides & Llantwit Major, Cowbridge, Penarth in Wales, before moving on to the West Country, Bristol, Cheltenham, Yeovil, Bridgewater, Sherborne, Chard, Taunton, Exeter, Weymouth.
” Unlike the hippies of Antifa demonstrating currently in Bristol during the lockdown, we will not break the law, although we have drawn up regions where ‘lefties’ clearly reside.
” We will be going full force to get our message across and nothing will stop us, we will also be welcoming all supporters to join us as we demonstrate.
“These will hard pushed campaigns and demonstrations, although unlike the hippies in Bristol, totally peaceful unless we get attacked first.
“I can’t reveal what we have planned but I can assure you it will highlight clearly our agendas and our voice” he finished.