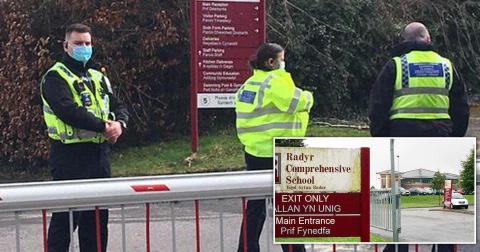 Radyr school evacuated with pupils were told to go home ‘immediately’ while police deal with a mystery incident.

Witnesses said pupils at Radyr Comprehensive School in Cardiff were told to leave after a fire alarm sounded.

Police officers were seen guarding the gates after the evacuation began just before midday today.

They are understood to have now left the scene.

David Lloyd, who lives near the school, said ‘I was walking my dog when I saw lots of police driving towards the school.

‘It’s really uncommon so I was baffled but everybody seemed calm.

‘I don’t know what has happened but they dealt with the situation quite quickly.’

Another parent, whose children were sent home, said: ‘There was a fire alarm during break and the children were told they had to leave the premises immediately and that the school needed to be evacuated.

There were around five police vehicles including two vans.

‘We haven’t been told what has happened or why the school needed to be evacuated.’

It is still unclear what exactly happened at the school.

A spokesperson for South Wales Police said: ‘Officers is currently in attendance at Radyr Comprehensive and dealing with an ongoing incident.

‘The school has been evacuated as a precaution. More information will be released when available and appropriate.’

The school tweeted: ‘We have had to send all the children home today. Further details will be provided later in the day.

‘The buses have been called and children will be boarding soon. Children who walk to school will be leaving the site at 11.15 am.’

Staff apologised for any inconvenience caused.