Mar 19, 2021 Welsh Labour MP denies taking a kip in the House Of Commons 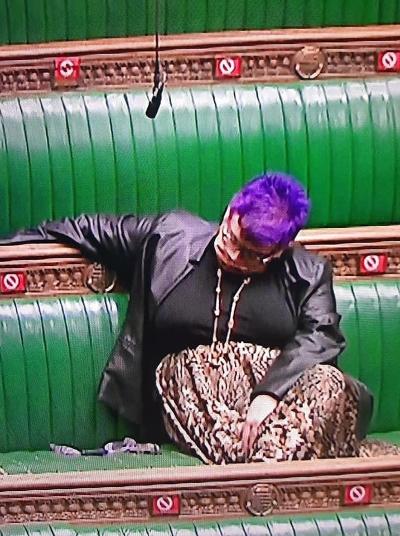 Carolyn Harris, MP for Swansea East, was captured on film what clearly looks like her ‘sleeping on the job’ on Wednesday during Question Time.

Whilst looking in the land of nod, the Swansea MP claims she was looking at her phone and the camera shot was an awful angle, although the majority of Wales appears to be disgusted with her actions as well as saying her reasoning is a ‘blag’

” There’s no way she is on her phone, she’s asleep on the job” stormed Ed Jones from Llanharry

” She looks pissed to me” claimed Daniel Hughes from Bridgend

The MP is now claiming that she has been bullied on social media and received toxic comments, especially on Twitter.

Although it’s not just her sleeping patterns that are of concern to one Conservative Party supporter in Wales.

Nigel Welling – Jones from Cowbridge, said: ” Whilst maybe she is actually awake, although I think not, look at the way she presents herself, look at the way she’s dressed, she looks more like a punk rocker than a politician, purple hair! – look at the state of it – and she’s supposed to be representing our great nation Wales, it’s a joke, she should be sacked, 70 grand a year plus expenses and she dresses like that!”

Although as the images spread across the United Kingdom, English political watchers waded in.

” She’s sleeping bless her, maybe it was a long drive up from Swansea or tough train ride in first class?” said Peter Hockin in Martock Somerset.

“Our MP’s are scruffy – but that’s taking the biscuit, it makes Marcus Fysh MP the smartest MP around!” he laughed.