UK Brexiters Stumped When Asked Where’s The Advantage Of Being Out Of Europe?

Mar 18, 2021 UK Brexiters Stumped When Asked Where's The Advantage Of Being Out Of Europe? 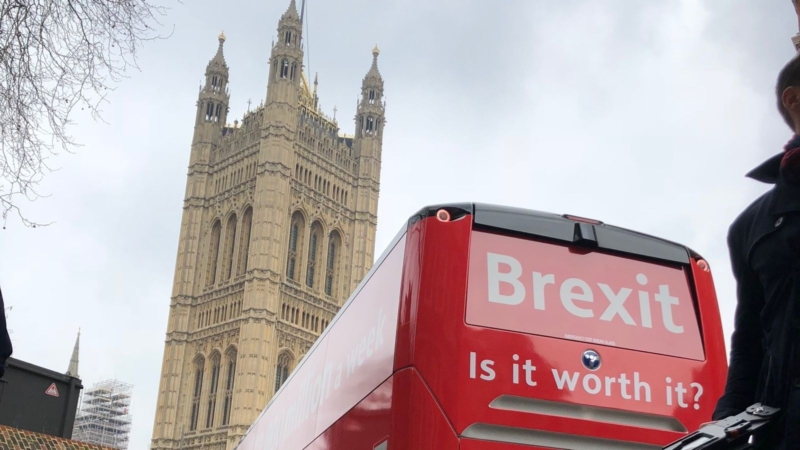 Survey reveals that UK Brexiters are stumped when asked the question ‘ Where’s the advantage?’

UK Brexiters Stumped When Asked Where’s The Advantage Of Being Out Of Europe?: With Great Britain now having been out of the EU fully since the start of the year, a survey has revealed that those who decided to ‘vote out’ of Europe can’t yet see where the advantages lie. Although many blame the Covid pandemic for no advantage being seen yet.

A survey targetted at residents across Wales & The West didn’t come up with any positive answers to where the advantages now are.

Whilst Britain sees it’s export market to Europe drop 45% and continue to spiral. With its import market suffering too, at the hands of massive inflation costs of shipments into the UK. Brexiters in the survey couldn’t come up with answers. Although stuck by their guns, often blaming the Covid pandemic as the reason for not yet seeing advantages coming through.

Out of the 1,000 people surveyed to the question of. ‘ Where’s the advantage of leaving the EU.’ It appears many were stumped in relation to a positive answer as the Country goes it alone.

350 million a week was sprayed across the infamous big red bus -stating departure from the EU would see the NHS benefit. Although the main headlines in the United Kingdom have been the disgust of nurses pay rises pending. Although Tony Greedy from Penarth in South Wales attempted to defend that point.

The former pub owner, in the Welsh village of Ystradowen, and local Mayor of Llantrisant said:

The advantage; we have Covid vaccinations, we don’t have the European Supreme Court  and we don’t have to put up with unelected dictatorships
Just to get the facts straight; the nurses have not been awarded ANY pay rise. The 1% is the recommended fuse to the pay commission; no decision yet. The main reason why trade is down is that most sensible companies “stockpiled” prior to Brexit in order to give it time to settle down, which it will!!
It’s simple; if you don’t like it, stay in Europe and don’t live here”
The dig at the one million-plus ex-pats who live across Spain, France, Portugal and other Europan countries telling them to stay in Europe and don’t live here’ didn’t go down well with the ex-pat population on Spain’s Costa Blanca, who are outraged by the Mayor’s comments.
Simon Nealon was furious when he contacted Global247news – the Benidorm based Managing Director of a large printing company said:

” Hark at him, clearly he hasn’t a scooby what he is on about, this coming from a man who likes to travel the world, I know him personally, he’s a sociable bloke face to face, but he’s a worldwide traveller and always has been since his days at sea, well he won’t be doing much travelling around Europe in the future, he’s locked himself into a maximum 90-day visit, and I know he used to go for at least 6 months – he’s shot himself in the foot! the sad thing is he has shot thousands of others with his vote”

Meanwhile, June Rosier, a property developer from Pontyclun in South Wales feels the advantage will be that residents in the UK will have to buy ‘British’ feeling that’s the advantage as she said in the survey:
“It will encourage people to buy British!!! Yayyyy!!” although she didn’t reveal what British homemade products she was referring too or explain how manufacturing in Britain will cope with its highly required export business losses?
Further West in Somerset, Yeovil building company owner, David Pinkett, felt it was a boring survey and blamed the pandemic for not having any credible answers yet.
Pinkett said: “Yawn, yawn. We are in the middle of a pandemic if you hadn’t realised” although didn’t have any further explanations to any advantages with his simplistic viewpoint.
Back in Wales, Richard Large, turned to the subject of vaccines, entering the political arena of the EU’s vaccine roll out as he questioned: “How is the EU’s vaccination programme going? –  See they are now trying to stop vaccines coming here and their project spite is in full flow.
“As for those exports and imports, it takes 2 for this to work and again the beloved EU are doing their very best to carry out their threats to punish us for leaving
“Oh and if you didn’t know we are still in the middle of a lockdown and the biggest crisis since 1939”
Although, Heather Peatfield a regular visitor to Spain, with her husband Colin warned:

“I am waiting for someone to complain about prices going up and if they say they wanted out of the European union you know me well enough to know my reply.”

Heather, one of  Global247news avid readers, is now restricted travelling to Spain to see her favourite performing artists to where previously she spent months on end, known for her sharp straight-shooting tongue, refrained on this occasion to her feelings, although she will freely express them it appears when Brexiters start complaining.
The debate appears will rumble on for many years to come yet, and to see whether there was an advantage to actually leaving the EU although many who voted out don’t appear to have seen one yet,
Travel Agent Leigh James, now living in Sweden, was clear in his view from his Swedish home, as he bluntly said:

“Easy answer NONE” and that so far seems to be the case for many as hundreds of British nationals prepare to leave Europe by the deadline of March 31st as their 90-day time limit runs out.

What’s your view? if you have an opinion or an answer to the question of ‘ Where’s the advantage of leaving the EU so far?’  contact editor Ian Platt admin@global247news.com
As Cardiff based Kevin Erdele said in the survey: “Ah but they have a blue passport now… absolute gonads” is he correct?