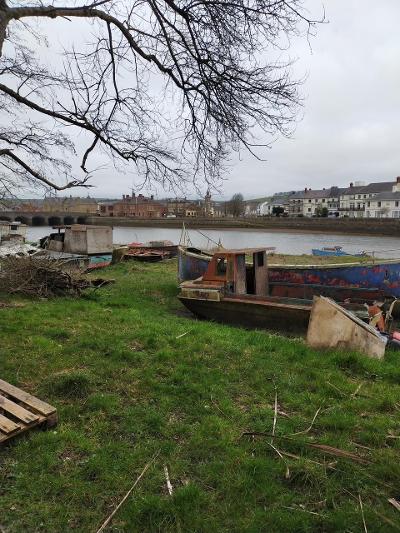 Barnstaple’s David Passmore has seen some sights travelling the globe, inspecting nuclear plants but he feels the river banks in Barnstaple will be on the level of Chernobyl after the disaster.

The now-retired nuclear scientist is calling on the local council to sort out what he regards as an eyesore and a disgrace that the council haven’t rectified.

If they don’t shortly, he claims he’s going to go down the river bank with 3 gallons of petrol and a lighter to sort it out himself.

On the banks of the town’s waterways, it appears that old boats are just dumped and left as scrap and an eyesore to the North Devon town.

Passmore told Global247news today as well as sharing on his social media pages: ” I thought if I contacted you and sent you photo’s the council may be forced to do something about it, but I won’t hold my breath

” I will be showing them how to deal with scrap wood and boats, I will bloody blow em up sky high!” he stormed.

He added: “If they think Chernobyl looked bad wait till I get started, I have had enough now, it’s been like this for years

” They have 14 days the council, if not they better watch out – I’ve already contacted former team members to assist to come and start the biggest explosion Barnstaple will ever see!” the very upset scientist raged.

Locals in the North Devon town appear to be giving their backing to a potential Barnstaple explosion event, Andy Withermore a delivery driver for nearby Devonshire Pine in Bideford said:

” I hope he goes for it, the town is backing him to do it, wouldn’t it be good to start the explosion on the first day out of lockdown

” Dave’s not a man to mince his actions either, you know what these scientists are like, I think the council better get their backsides in gear before Dave goes to war, he’s capable of anything”

We contacted the local council this afternoon but nobody was available for comment.