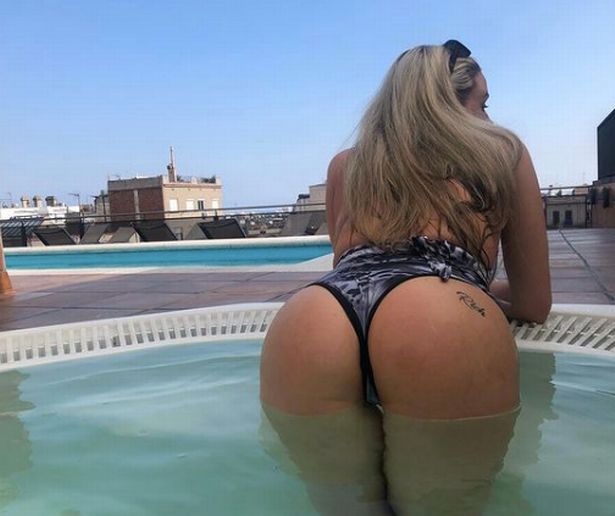 Gemma Greene, outrun Irish cops in her high powered car down the M50 between Bray and Dublin.

As the police chased in pursuit, which involved 20 cars and a police helicopter, the brazen blonde still managed to escape the arm of the law despite her claims of being boxed in three times. She was eventually captured as she ran out of fuel.

Greene also had the audacity to live stream the police chase.

With an Irish court case looming and police restrictions in place that she should not leave Ireland – Gemma, from Coolock, North Dublin has started taunting the Irish police with selfies and other images of herself enjoying the delights of Spain.

She told followers she had flown to the Spanish capital Madrid and later shared a map of her route to the Catalonian city.

Upon supposedly arriving in Spain, Greene posted about how “strict” regulations were and about how she’d been “scruffed in to be tested” for Covid-19.

One photo shows her in a hot tub and another on a balcony.

Gerry Jackson, a close friend of Gemma’s, from Dundalk, tells Global247news, she has no intention of returning for the court case as well as stating how she has gone to Europe despite police restrictions.

” She’s parked her arse in Spain as is clearly loving every minute of it, taunting the police on social media, she’s always been a bit of a wild child

” I don’t think she realises though she only has 90 days there before the Spanish police can deport her due to the new Brexit regulations, so she will have no choice to return and I would think to face a jail sentence for her actions”