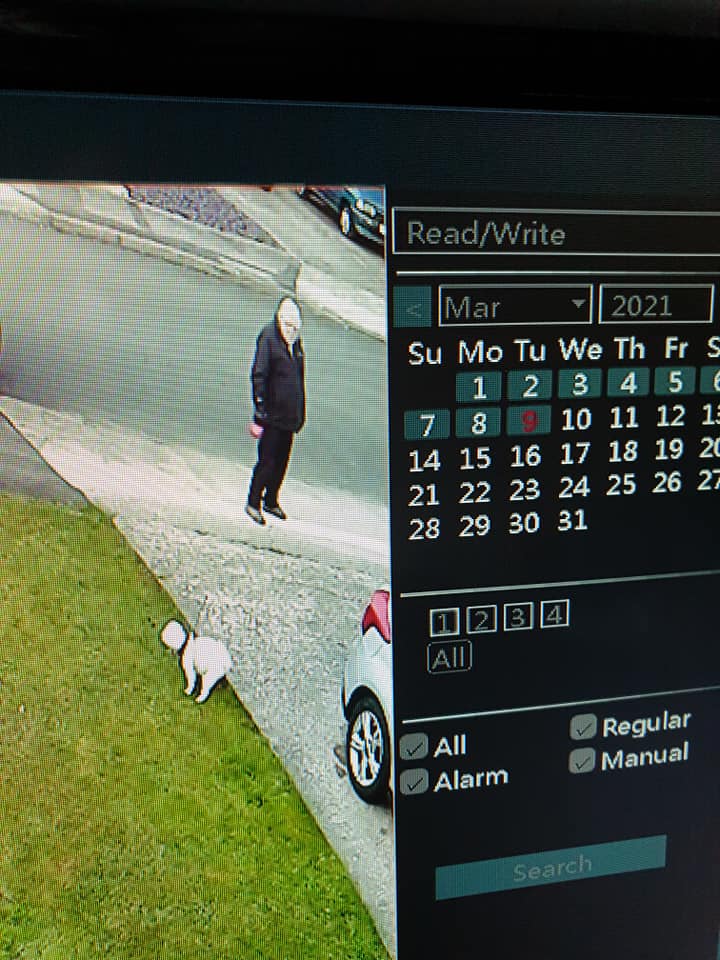 Brackla, just outside Bridgend has in recent times had a large dog poo issue with many residents complaining over several months complaining about their front lawns being soiled by dog excrement.

It has left residents mystified for several months until now when a local resident Gwilym Phillips captured a retired prison officer allowing his dog to spread its poo over his garden and just walking away.

Mr Phillips captured the criminal offence on film this morning and shared the capture with local residents.

“Couldn’t believe it, stood at the kitchen window about 7 am, this old git let his dog crap on our lawn, with no intention of cleaning it up. Followed him and took his pic, he has been doing this for years, this is the third time I have actually grabbed a coat and chased after him. He walks his dog around the block in Cae Brackla, if you have a problem with crap on your lawn, he may well be responsible.”

The former prison officer was soon identified as hundreds of residents were delighted to put a face to the poo being left on their lawns, with many calling for him to be reported to the police.

Ex-con, ‘ Jacko Jones’ contacted Global247news to say ” I couldn’t believe it was him, but it defiantly was, he was a screw in Parc Prison and always was self-righteous when it came to the law and here he is letting his dog carry out its illegal deeds on peoples well-maintained laws, apparently he’s been doing it everywhere

” He should be thrown in prison himself, it’s disgusting,” said reformed Jones.

Local resident Kath Ridley revealed how locals had been trying to catch the perpetrator for months, she said: ” He’s become known locally as the ‘phantom dog poo spreader’ but nobody could actually catch him and it remained a mystery until now, I would have thought a prison officer would have far more respect for the law”

The footage is now being examined by South Wales Police, fines from £80 to £1000 can be applied if found guilty of the offence.